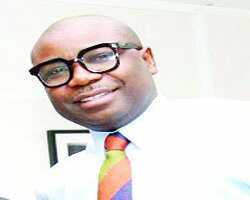 A vastly experienced professional, Charles was Divisional Head, Marketing and Corporate Relations at Pan-African financial services group, United Bank for Africa (UBA) prior to joining Fidelity Bank.
He started his career in the investment-banking end of the Nigerian financial industry, with defunct Kapital Merchant Bank before moving into broadcasting when he joined DBN Television in the mid 90s. He left as News Controller/Business Editor in late 2001 to take up an appointment with UBA in January 2002.


Through hard work, determination and continuous pursuit of excellence, Charles soon established himself as a go-getter and team player at UBA, rising to head the overall communications and CSR functions in the entire Group.
Posted by MAN ABOUT TOWN at 3:58 PM