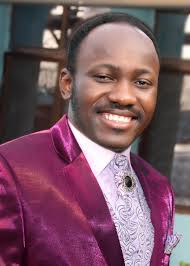 The General Overseer of Omega Fire Ministries Worldwide, Apostle Johnson Suleman, has formally been invited by the Department of State Services to appear at its National Headquarters in Abuja,
SUNDAY PUNCH has learnt.

Our correspondent learnt on Saturday that the cleric was invited for interrogation on Monday (tomorrow) by 10am, based on his recent alleged inciting comments that Christians should defend themselves against attacks by Fulani herdsmen.
“Suleman will be appearing before the DSS with about 30 lawyers because we believe that his persecution has become politicised,” a source stated.
The invitation is coming four days after Governor Ayo Fayose of Ekiti State foiled attempts by the DSS to arrest Suleman in his Hotel room at Ado-Ekiti.
The Christian Association of Nigeria had also raised the alarm that Suleman “has become a refugee in Ekiti State as security operatives are said to be searching every nook and cranny of the state to arrest him.”
The DSS had reportedly invaded a hotel in Ekiti where Suleman and his team, who were in the state capital for a crusade, were accommodated.
Sources close to Suleman told SUNDAY PUNCH that he had indicated his intention to respond to the invitation.
When contacted, the clerics Communications Adviser, Mr. Phrank Shaibu, confirmed the invitation, saying he would appear before the DSS on Monday.
He said, “Yes, I can confirm to you that he (Suleman) was officially invited and as a law-abiding citizen, he will honour the DSS invitation on Monday. The invitation, though ludicrous and an afterthought, is a welcome development.”
Reacting to the invitation, former Prelate of the Methodist Church of Nigeria, His Eminence Sunday Ola Makinde, told SUNDAY PUNCH that Nigeria should not be turned to a “police state.”
Makinde said, “He should be law-abiding, let him go and face the DSS. Let us see if they will detain him and they will detain so many religious leaders in Abuja.
“Nigeria is greater than any religion and Nigeria is greater than anybody. The DSS should watch it. If they like, let me be the next victim. What is annoying them is that Suleman converted from Islam to Christianity.
“Self-defence is permissible; they slapped our first cheek. They slapped the second cheek and we have no other cheek to turn for them. We may therefore resort to self-defence because this thing is becoming intolerable.”
The cleric is expected to tell the DSS how President Muhammadu Buhari would face impeachment threats and how Abuja would experience major fire explosion as contained in his predictions.
Suleman, according to a security source is also expected to give an insight into his prediction that “Buhari will be bereaved in 2017” and that the President’s “health needs attention.”
The security agency is also expected to drill him on his prediction that “Forces in Aso Rock are planning to poison current First Lady (Aisha Buhari).”
The security source said most of the actions and predictions of the prophet could destabilise the country.