Mounting Pressure For Code Of Conduct Tribunal Chair, Danlami Umar To Undergo Another Investigation For Bribery & Abuse Of Office 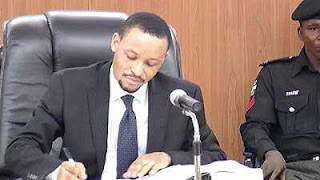 Civil Society Network Against Corruption (CSNAC), a coalition of over 150 Nigerian anti-corruption groups, has urged the Economic and Financial Crimes Commission (EFCC) to re-investigate Code of Conduct Tribunal (CCT) Chairman Danlami Umar over his alleged involvement in bribery and
abuse of office.

According to the coalition, a case between the CCT and the former Comptroller of Customs, Rasheed Taiwo, involving bribery and abuse of office implicated Mr. Umar, prompting the need for a fresh investigation against the CCT chair.
CSNAC is alleging that Mr. Umar demanded a N10m bribe from Mr. Taiwo while he was being prosecuted for failing to declare his assets while serving as Comptroller of Customs.
In CSNAC's petition to the EFCC, the coalition's national chairman, Olanrewaju Suraju, explained, "Mr. Umar was alleged to have demanded a N10 million bribe from a retired Comptroller of Customs, Rasheed Taiwo, who was prosecuted at the CCT for allegedly failing to declare his assets while in office. A newspaper stated that the retired Comptroller of Customs, Mr. Taiwo, had reported the demand to the EFCC and was advised to play along, leading to the payment of N1.8 million to the Chairman of the CCT through the latter's personal assistant."
CSNAC further explained that three CCT employees - Shotunde Adeyinka, Lucky Eronlan, and Johnson Owopetu - were transferred from the Abuja headquarters to Ondo, Bauchi, and Katsina States, respectively, under "controversial circumstances." The trio had allegedly petitioned the EFCC to investigate Mr. Umar's corrupt actions, including awarding contracts without due process, making full contract payments to contractors instead of mobilization fees, and appointing and promoting employees without adhering to the federal character principle.
The EFCC, however, found that the allegations against Mr. Umar were "mere suspicion" and lacked sufficient evidence to prosecute him. CSNAC said this statement contradicted a report by Leadership Newspaper which revealed that the EFCC told an Abuja High Court that Mr. Umar's personal assistant, Alli Gambo Abdullahi, named Mr. Umar as the beneficiary of Mr. Taiwo's bribery payment. However, Mr. Abdullahi later denied making the statement.
Abdulmajeed Ibrahim, an EFCC operative, said, "the denial made by Abdullahi in another statement cannot invalidate the first statement of 2013 because it was voluntary made by the accused person. The witness, who was led in evidence by EFCC Counsel Andrew Akoja, urged the court to disregard and reject the denial of Abdullahi that he did not give the bribery money to Justice Umar."
Another EFCC operative, Bala Mohammed, corroborated this statement, saying that Mr. Abdullahi made his original statement freely and was not harassed or pressured into doing so.
In light of these facts, CSNAC has therefore urged the EFCC to reopen its investigation against Mr. Umar.
"Considering the testimonies of your operatives as reported above, CSNAC is demanding your commission's urgently reinvestigation in this matter and subsequent prosecution of Mr. Danladi Umar where his culpability is established as asserted by your detectives in the trial of Mr. Umar's Personal Assistant," CSNAC said


saharareporters
Posted by MAN ABOUT TOWN at 11:38 PM