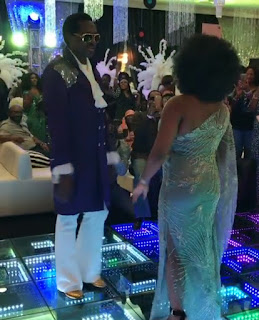 Yes, Sahara Energy’s triumvirate of Tonye Cole, Tope Sonubi and Ade Odunsi, are successful young men whose storied and sensational life would make many of their peers feel like they came to the world at a wrong time. Apart from the fact that they are rock solid financially, some days ago, their company once again won the mouth-watering Crude Oil Contracts they have been doing for many years.

Interestingly, however, one man’s definition of excessive is another’s derisory sum. But as an end, the acquisition of wealth by the rich is never ignoble in the extreme; particularly when the affluent is a man who acquires wealth only as a means of enabling him do a lot of good in his days and as a guarantee of unforgettable treats to himself and wards when need be.

It is hardly surprising therefore, that one of the three wise men, Tonye Cole who clocked 50 last Wednesday, would go out of his way to stage a grand birthday party at
the prestigious Civic Centre, Lagos, yesterday, Friday night. The Sahara Energy boss, Tonye, apparently unperturbed by the tumultuous waves of recession thrashing every aspect of the economy, summoned his most affluent means and resources to give himself to one of the grandest birthday celebrations in January 2017.

Yes, the theme for the party was old-skool- Bringing the 70s back. As the night fell, the fireflies danced and twinkled with grace above the crew cut hedges of colourful flowers, yet nature stymied in shame and jealousy at the marvelous beauty of the love and loyalty shown to Tonye by his loved ones. Each twinkle of the stars was a testament to the richness of the celebrant’s resplendent soul.

The celebrant treated his guests to good and delightful music. As the woofers belted out familiar, evergreen tunes, their hair stood on end and they tipped over in merriment – their  joy spilling from their souls into the air and sky high. Enthralled, the guests moved in gaiety, tap dancing and swaying to the beat as if they meant to enact a madhouse jamboree with the tenacity and agility of veteran dance and music buffs.

Guests at the party were treated to the choicest liquor and sumptuous meals made by the finest caterers. It no doubt warmed the cockles of the celebrant’s heart to see dignitaries at the event smack their lips in pleasure as they devoured the sumptuous meals and drinks offered to them at his anniversary.

All the withered bouquet crowns fell on trodden ground. They sank into the rug among the expensive garbage of empty wine bottles and champagne corks. Memories of tipsy and appreciative folks with tired eyes, hoarse tenors and weary legs evoke random echoes of Tonye’s classy 50th birthday bash.

Dignitaries at the event forgot their worries and ditched the family challenges of the mundane to rejoice with the oil big boy. The sound of the bass reverberated in their chests as they cheered and celebrated the man widely and fondly referred to as ‘Pastor’ TC.
Posted by MAN ABOUT TOWN at 12:30 AM