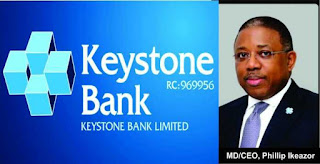 These are not the best of times for Keystone Bank Limited and its managing director/chief executive officer, Mr. Phillip Ikeazor as the House of Representatives on Monday urged the Economic and Financial Crimes Commission to commence investigation into an alleged illegal movement of N4 billion from the Industrial Trust Fund’s account domiciled with
the lender.

Rep. Ibrahim Baba, the Vice Chairman, Public Accounts Committee, House of Representatives, made the call following a query issued by the office of the Auditor-General of the Federation.
According to the query dated December 2010, a total sum of N4.2 billion was illegally moved three times in November from ITF account to other accounts, all belonging to same agency.

The Office of the Auditor-General questioned the propriety of moving the money without remitting N23.5 million interest accruing from the transactions to the agency’s account.

It also needed to ascertain who authorised the transactions and for what purpose it was done.

Responding to the query, the Director-General and Executive Chairman, ITF, Joseph Ari, said the transactions were made without the authorisation of the agency.

Ari said the bank’s response in May 2012 explained that the withdrawal from ITF’s remittal control account was done in error.

According to Ari, Keystone’s position is that it was a wrong posting but was later corrected.

He said: “However within the days the money was moved, ITF wrote Keystone Bank to remit the interest to the account accordingly but the bank didn’t reply.

“We reported the matter to the Central Bank of Nigeria and the CBN advised that parties should sit down and discuss.

“However, we sat down with keystone officials without finding solution.
Posted by MAN ABOUT TOWN at 11:49 AM