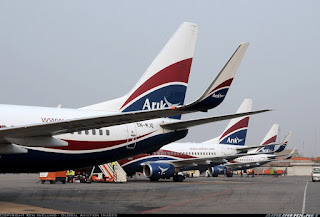 The Asset Management Corporation of Nigeria (AMCON) said yesterday that Arik Air would require over N10 billion cash injection before resuming full and uninterrupted operations on its regular domestic and international routes.
The nation’s biggest airline was last Thursday taken over by the Federal Government through AMCON over a N300 billion debt profile.
According to the
new management, only nine aircraft of the 30 in Arik’s fleet are operational. The remaining 21 are either grounded or overseas for C-check.

It also said the airline became broke, unable to procure aviation fuel for the nine operational aircraft because dealers insisted on cash-and-carry basis.
The management called for public understanding because flight schedules might be realigned based on the nine aircraft that were technically sound and ready for flight operations.
Arik was also said to be owing its technical partners and in perpetual default in its lease payments and insurance premium, leading to regular and embarrassing squabbles with different business partners.
There is also a huge staff salaries default, the management said, adding that some workers were unpaid for 11 months; vendors that supply different items were also owed.
The Chief Executive Officer, Capt. Roy Ukpebo Ilegbodu, under the receivership of Oluseye Opasanya, reassured Nigerians that these issues; though daunting, would be gradually resolved to enable Arik Air , which controls about 55 per cent of the market, to recover fully.
According to the CEO, should all the Aircraft return to flying, Arik would within the shortest possible time, regain its pride of place as the market leader.
Already, the management said having settled the insurance cover for the aircraft, which would have expired on February 12, and met with different trade creditors and the aggrieved staff, Capt. Ilegbodu called for public understanding to ensure that Arik returned to full operational capacity within the shortest possible time.
The federal government maintained that the intervention was in the best interest of the industry, the general public, workers, creditors and other aviation interest groups.

thenation
Posted by MAN ABOUT TOWN at 11:14 PM