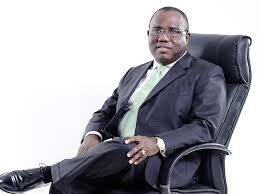 Contrary to expectations, Heritage Bank Chairman Akinsola Akinfemwa is not stepping down from his position any time soon.

The known name was expected to move out of his position in December 2016.

He was said to have made preparations towards this and initiated moves to
fully embrace a real estate company he floated quietly.

But all that is changed societynowng.com gathered.

''The circumstances that almost forced him out is reversed'' a source stated.

Informants disclosed the faction that brought the chairman to power is again in position to safeguard his position.

''His people were outplayed last year, but they bounced back in the nick of time prevent his ouster'' an insider stated.

The financial institution faced with allegations of battling for survival is enmeshed in serious battle for control by different factions of investors.

Akinmfewa was reportedly caught on the other side of the raging battle and faced a force out as Chairman towards the end of the year.

The banking industry and related public were agog with news of impending ''step down''..but that appears a thing of the past as the tide of ''power'' is said to now favour him once again
Posted by MAN ABOUT TOWN at 2:31 PM