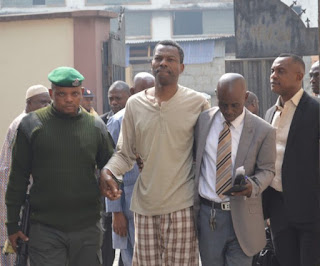 An Abuja high court on Tuesday granted bail to Chidi Duru, a former member of the house of representatives, who was on a four-count charge of alleged fraud.

The charge bothered on diversion of funds and criminal breach of trust.
At the beginning of proceedings,
Sylvanus Tahir, prosecuting counsel, protested that the accused did not comply with section 256 administration of criminal justice act (ACJA)  by taking his place in the dock.

Chidi was seated outside the dock during the court proceedings.
But Peter Affen, the judge, directed that he should take his plea outside the dock.
“There are some things I don’t bother about as long as it’s along with the law,” he ruled.
Tahir urged the court to the court to accept the four-count charge against Duru dated January 12 and filed January 16.
But Duru pleaded “not guilty” after the charges were read.
The prosecution further sought for a trial date to enable him present his witnesses against the accused.
He also prayed the court to remand Duru in custody, saying he should not be granted bail because there was no written application before the court.
“No material (formal application) has been placed before this court any material to enable the court grant him bail,” he said.
Citing section 162 of the ACJA, Tahir said the defendant has been evading arrest and should not be granted bail.
Responding, Abdul Mohammed, counsel to Duru, asked the court to grant his client bail as entailed in the ACJA.
Maintaining that the defendant is entitled to bail unless the court sees reasons why he should not be released, the defence counsel said its request should be granted on “reasonable terms.”
Mohammed argued that the requirement of a formal application for bail was a “misconception” of law and should be “discountenanced.”
Ruling on the matter, Affen said he took judicial notice that the defendant was a lawyer.
He granted bail to Duru on self-recognition, but asked him to submit his international passport.
The court adjourned hearing into the matter to February 27.
On January 15, the management of First Guarantee Pensions Limited (FGPL), where he was vice-chairman until 2011, said Duru stormed the company’s premises with some gunmen, with the intention of taking control.
Duru was also accused of illegally diverting N20 million belonging to FGPL.


thecable
Posted by MAN ABOUT TOWN at 2:36 PM