Ex Gov Ibrahim Shema To Cough Out N1billion To Go Home On Bail! 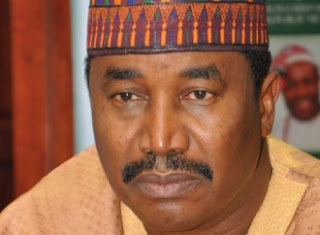 Ibrahim Shema, former governor of Katsina state, has been granted bail to the tune of N1 billion.

Shema and three others were Tuesday arraigned before a Katsina state high court on 22 count charges of misappropriation of about N11 billion and forgery of government documents.
The ex-governor and his
three co-accused were arraigned by the Economic and Financial Crimes Commission (EFCC) before justice Maikaita Bako over financial misappropriation and abuse of office between 2012 and 2015.

Shema broke down in tears after operatives of the EFCC arrested him on February 7.
The anti-graft agency had in September declared him wanted for allegedly refusing to honour its invitation.
Shema has denied the allegations of corruption levelled against him, accusing Bello Masari, his successor, of being responsible for his legal troubles.