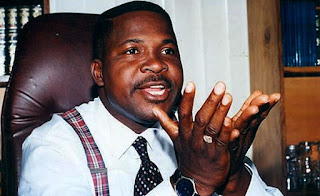 A Federal High Court in Lagos on Tuesday ordered the temporary forfeiture of N75 million in the account of a Senior Advocate of Nigeria, Mike Ozekhome, domiciled with Guaranty Trust Bank (GTB).

The court
, presided by Justice Abdulaziz Anka, gave the order while ruling on a motion ex-parte filed by the anti-graft agency seeking that Mr. Ozekhome’s account be temporarily frozen.

The sum is said to have been uncovered by The Economic and Financial Crimes Commission (EFCC).

EFCC’s prayer is on the ground that the N75 million deposited in the said account on December 15, 2016, is suspected to be proceeds of crime.

Mr. Mohammed informed the court that three exhibits marked 01, 02 and 03 were attached to the motion ex-parte.

He also said that an affidavit of urgency, sworn to by an investigator of the agency, Tosin Owobo, was also attached to the application.

Mr. Mohammed, therefore, urged the court to grant the motion ex-parte and order a temporary forfeiture of funds in the account for 120 days.

Delivering a bench ruling on the motion, Justice Anka ordered that Mr. Ozekhome’s account with the sum of N75 million be forfeited for 120 days.
The judge however said that any party, dissatisfied with the ruling, could file an appeal.
(NAN)