Why I May Run For Pesidency, Powerful Politician Bola Tinubu 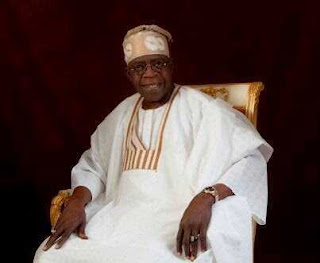 Bola Tinubu, national leader of the All Progressives Congress (APC), says he may take a shot at the highest office in the land, but
emphasised that, that could only happen if there is a vacancy at Aso Rock.

If not for the consideration of a Muslim-Muslim ticket, Tinubu would have been the running mate of President Muhammadu Buhari in the 2015 election.
He had to cede the slot to Vice-President  Yemi Osinbajo.
But in a video obtained by Sahara Reporters, Tinubu said vying for any office in Nigeria is an opportunity to serve his country.
The news website said the APC leader spoke at the inauguration of Rotimi Akeredolu, governor of Ondo state,
“You see there is nothing wrong with such ambition. It depends on the timing and the environment and what political leadership dictates. I will not brush aside such an aspiration,” Tinubu said.
He alluded to Buhari’s several attempts at the presidency before finally winning in 2015.
“It has been historical even that Buhari tried first, second, third, and fourth before he got it,” he said.
“Resilience, determination, and clarity of purpose. Maybe as a senator, maybe as a president, you cannot rule it out. How can I rule such a thing out, the opportunity to service my country but you only do that when there is a vacancy.”

Speaking about the health condition of the president, Tinubu said Buhari has been very honest in disclosing that he needs medical attention.
“An honest man disclosed to you that he is going to leave, he is going to have a medical check-up, he has disclosed that he needed more time,” he said.
“He has told you, he has told us honestly that he needed medical attention. What his doctors will discuss after that is subject to experts who should not be discussed until he is ready to disclose it. He told us that he cannot return now, what else do you want him to do.”
He advised Nigerians to pray for the president, insisting that he (Buhari) is alive and healthy.
“Only God gives life, and only God can take it. The man that I have seen is well, alive. We should promote welfare, praying for the wellbeing of our leaders.”
He also spoke about the ruling party, saying there is no rift whatsoever among APC leaders, and accused the media of concocting stories to suggest the contrary.
Tinubu fell out with Akeredolu in the run-up to the Ondo governorship election, but his presence at the inauguration could mean that the differences between both men have been put aside.
A former senator, Tinubu was governor of Lagos between 1999 and 2007.


thecable
Posted by MAN ABOUT TOWN at 7:46 AM