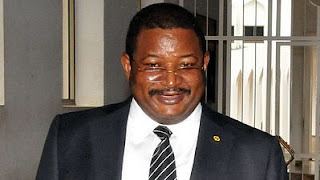 The Economic and Finacial Crimes Commission( EFCC) yesterday finalised plans for the trial of a former Group Managing Director of the Nigerian National Petroleum Corporation (NNPC), Dr. Andrew Yakubu, over $9,772,800 slush cash.
Also, the embattled ex-GMD lost his battle for bail yesterday following the obtaining of a court order by the EFCC  to remand him in custody pending his arraignment in court.
But the EFCC’s  latest investigation revealed that the ex-GMD did not tell his
brother, Bitrus Yakubu, that he was hiding such a huge sum in a safe  in the slums of  the Sabon Tasha area of Kaduna.

Detectives were shocked that Bitrus got to know after they discovered the safe.
As at press time, the EFCC has concluded that Bitrus will not be prosecuted under any guise.
According to findings by our correspondent, the Head of Zonal Office of the EFCC in Kano has submitted a comprehensive brief on the investigation of Andrew Yakubu to the Acting Chairman of the agency, Mr. Ibrahim Magu.
It was learnt that a “prima facie case has been established against the former GMD and he is recommended for immediate trial.”
A top source in the EFCC said: “From the weight of evidence so far, we have taken a decision that the former GMD should be on trial anytime next week.
“We are ready with charges preferred against him and we will be in court any moment from next week.”
Responding to a question, the source added: “In line with our commitment to the rule of law, the EFCC has obtained a court order to remand Andrew Yakubu in custody until it is ready to arraign him in court.
“In fact, Andrew Yakubu is yet to make the list of those who purportedly gave him the $9.7m as a gift. He has been adamant.”
On the fate of Bitrus, the younger brother of the ex-GMD, the source added: “Investigation has not linked him to the slush funds in any manner whatsoever. He has no case to answer.
“Detectives actually discovered that Bitrus Yakubu did not know that such a huge cash of $9,772,800 was hidden in a safe in his brother’s house in the slums of Sabon Tasha in Kaduna.
“So far, Bitrus will not be prosecuted. It is only his brother that will carry the cross.”
A statement by the Head of Media and Publicity of the EFCC, Mr. Wilson Uwujaren, said a special operation conducted by operatives  on  February 3 yielded the recovery of a staggering $9,772,800 and another sum of £74,000  cash.
The statement said: “The huge cash was hidden in a fire-proof safe. The surprise raid of the facility was sequel to an intelligence which the commission received about suspected proceeds of crime believed to be hidden in the slums of the Sabon Tasha area of Kaduna.
“On arrival at the facility, the caretaker of the house, one Bitrus Yakubu, a younger brother to Andrew Yakubu, disclosed that both the house and the safe where the money was found belong to his brother, Andrew Yakubu.
“When the safe was opened, it was discovered that it contained the sum of $9,772,800 and  £74,000 .
“On February 8, 2017, Andrew Yakubu reported to the commission’s zonal office in Kano and made statement wherein he admitted ownership of the recovered money, claiming it was a gift from unnamed persons”.


thenation
Posted by MAN ABOUT TOWN at 10:24 PM