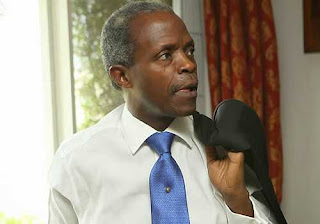 The Acting President, Yemi Osinbajo, was on Friday forced to cancel his trip to Akure, Ondo State capital, due to bad weather.
The presidential jet that conveyed Osinbajo was said to have been unable to land at the Akure Airport due to the situation.
Hence, the aircraft made a return
to Abuja about five minutes to landing time in the Ondo State capital.

The outgoing governor of Ondo State, Dr. Olusegun Mimiko, had invited the Acting President to inaugurate some projects in the state before leaving the government.
He is scheduled to hand over to the Governor-elect, Rotimi Akeredolu, on February 24, 2017.
A statement by the state’s Commissioner for Information, Kayode Akinmade, on Thursday, said Osinbajo was scheduled to inaugurate the International Event Centre, also known as The Dome, in Akure.
Akinmade outlined other projects scheduled for inauguration to include a mega school in Ijapo and the Aboto Water Scheme in Ilaje, in the southern senatorial district of the state.
Shortly before the trip was aborted, Mimiko was said to have led some top government officials to the airport for the purpose of receiving the Acting President.
Members of Osinbajo’s advance team were already on the ground in the state before the trip was aborted.
The Acting President, on return to Abuja, moved straight to his office inside the Presidential Villa.
A similar situation occurred on December 29, 2016 when President Muhammadu Buhari had to suspend a one-day working visit to Bauchi State.
The President had been scheduled to inaugurate the Nigerian Air Force Hospital and some other projects executed by the state government, but could not do so due to unfavourable weather.
The Senior Special Assistant to the President on Media and Publicity, Mallam Garba Shehu, had said, “Uncooperative weather, which has been the bane of air travel in the current harmattan season, leading to the delay and cancellation of flights, reared its head in Abuja Airport, preventing the take-off of the President’s plane for the trip to Bauchi.”
Shehu had, however, quoted the Minister of State for Aviation, Senator Hadi Sirika, as saying that plans were underway to upgrade the Instrument Landing Systems at the country’s major airports to ensure that they worked better.
Meanwhile, due to Osinbajo’s cancelled trip to Akure, the Ondo State Government has postponed the inauguration of the International Event Centre till Monday, February 20, 2017.
Addressing the people who came to welcome the Acting President on Friday, Mimiko appealed to them about the situation.
“The Acting President was very touched for keeping you waiting. He is very strict about time. He requested that we should postpone it till Monday and I want to assure you that he will be here then by the grace of God,” the governor said