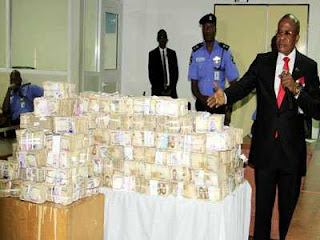 The cash, they claimed, is part of the N360 million bribe allegedly paid by Governor Nyesom Wike to compromise
electoral and security officials for his party’s candidates to win.

The unnamed officials have been indicted for their involvement in the violence that occurred during the election, the police said.

Six policemen indicted for their role during the election have been dismissed. They are to be prosecuted.

This is part of the report of the Joint Investigation Panel constituted by Inspector General of Police (IGP) Ibrahim Idris on December 22, 2016, to probe the violence that led to the killing of two policemen during the election.

The report was submitted to the IG at the Force Headquarters in Abuja yesterday.

But the governor rejected the report as “malicious, defamatory and reckless”. He denied all the claims by the panel, which he accused of being biased.

The 12-member panel comprises nine policemen and three Department of State Services (DSS) personnel. It was mandated to investigate the various infractions, incidents, and violence that marred the rerun.

The panel attributed the violence to lawlessness and leadership failure.

The chairman of the panel, Damian Okoro, a Deputy Commissioner of Police (DCP), said N111.3 million was recovered from 23 INEC officers. He said three senior electoral officers collected N20 million each of the N360 million allegedly given to them by Wike. The remaining officers received N15 million each.

Okoro said the committee established “cases of misconduct on the part of some electoral officers and law enforcement agents who, unfortunately, allowed themselves to be compromised in their line of duties and deserve to be disciplined appropriately.”

He added that “the task given to the panel was quite challenging because of the tense political and security situation in the state, especially the prevalence of violent crimes, such as armed robbery, kidnapping, and politically motivated killings, by militant and culture groups that enjoy the funding and protection of desperate politicians.

“These lawless elements target not only the political opponents of their sponsors but also law enforcement agents, especially the police, mostly within the Ogba/Ndoni/Egbema Local Government Area, which is the axis of evil of cultism.

“The violence that occurred in Rivers State, before during and after the rerun was a reflection of lawlessness and leadership failure of narrow-minded politicians and their gullible supporters. Oftentimes, politicians make inflammatory statements that incite their supporters into avoidable violence that results in the destruction of lives and properties and eruption of elections.

“Regrettably, these politicians often fail to realise that as very important personalities in their own right, they are the embodiment of some values cherished by their supporters.

“Apart from their utterances, politicians, in their desperation for political power also arm thugs and unleash terror on their opponents. When motivated by their sponsors these criminal elements can do anything to further the political aspirations of their principals, including extra- judicial killings and rigging of elections with impunity.

Okoro went on: “We discovered that failure of leadership and followership rather than law enforcement was responsible for political upheaval in the state.”

A source close to the investigation confirmed that forensic analysis showed that Wike’s was the voice the one in a controversial tape that went viral on the social media following its leakage to an online medium.

The source, pleading for anonymity, said: “After forensic analysis was conducted, it was discovered that the voice was truly that of the governor. Also, those indicted were interviewed and they confessed on video tape that the governor gave them money. They explained how they were invited and escorted back to their hotel rooms with money in different bags.

The IG said the panel wrote to Wike but he refused to cooperate.

He said its report and recommendations would be forwarded to the Attorney General of the Federation, Abubakar Malami, for further action.

Said Idris: “The Panel tackled what has been going on in this country where politicians have turned election into a do-or-die affair and we have been failing in this country because we have allowed things to derail to this level.

“I see no reason why a rerun will lead to the beheading of our officers who were there to do their lawful duties. I believe that the report will go a long way to put an end to individuals seeing election as a do-or-die affair.

“We will take appropriate actions in conjunction with the law officer of the federation, the Attorney General of the Federation, in order to put an end to most of the abuses and electoral violence in this country.

”People that were arrested are going to be prosecuted because they are public officers. We are going to forward the report and our recommendation to the Attorney General of the Federation.”

On the source of the recovered money, the police chief said: “From the confession of those the money was recovered from, they said the money was from the state government. I can assure you that from here, the money will go into government treasury because these are recoveries on the basis of an investigation conducted.

“Six police officers were indicted and they have already been dismissed and I can assure you that they would also be charged to court.”

Asked about the doubt Wike had on the panel and if its report was not targeted at tarnishing his image, Idris said: “it is a joint investigation and that means it is between the police and SSS and I think the whole of this country have confidence in both agencies to provide security for them and to deal with issues that are detrimental to peaceful co-existence of Nigerians in any part of this country.

“We are in a democracy and everybody has the right of free speech. Anybody can wake up any day and say anything but what I am saying is that you have to go through the report to see the processes we took before arriving at where we are.

“The investigation was open and very transparent. We wrote to the governor, they went to meet him but, in his own wisdom, he refused to cooperate. We believe that what determines outcome of this report is the transparency and the good will.

“Whoever that is involved has been arrested and isolating the governor will be a disservice to this country.
The report should be seen as a corrective measure. Those indicted cut across different classes of life.
The IG described the manner in which two policemen were killed as “barbaric”.
Report shameful, defamatory, reckless, says Wike

The Governor Nyesom Wike administration in Rivers State has condemned alleged blackmail by the committee set up by the Inspector-General of Police (IGP), Ibrahim Idris, to probe the December 10 last year’s bloody legislative rerun, describing the police’s action as “shameful”, “defamatory” and “reckless”.

Commissioner for Information and Communications Dr. Austin Tam-George yesterday in Port Harcourt, the Rivers State capital claimed that the committee was being economical with the truth.

Tam-George said: “The attention of the Rivers State Government has been drawn to the melodramatic images of heaps of cash, circulated in the media by the so-called police panel of inquiry into the rerun elections in Rivers State, on the 10th of December, 2016.

“According to the police, the heaps of money were ‘evidence’ of bribe allegedly given to officials of the Independent National Electoral Commission (INEC) by the Rivers State Governor, Nyesom Wike, during the rerun polls.

“We consider the allegations of the police as shameful, defamatory and reckless in the extreme. Never in the annals of infamy have we seen a vital state security institution descend to the lowest depths of blackmail and criminality, as the Nigeria Police Force has done in this case.

“A month ago, we alerted the world to the dark, Orwellian plot by the Nigeria police to implicate Governor Wike in a phoney bribe scandal. Now, the police appear to be acting with shocking predictability, by making wild and completely groundless allegations against Governor Wike.

“The Rivers State Government challenges the Nigeria Police to show proof that Governor Wike financially induced any official of INEC. Do the police have bank records of the purported transactions between Governor Wike and the electoral officers? We challenge the Nigeria police to move quickly to prosecute and imprison the so-called electoral officers on the basis of this dubious investigation.”

Tam-George said Wike’s administration strongly believed that the committee was part of a bitter, politically-driven smear campaign, allegedly launched by the Federal Government against the state governor and the people.

He noted that the government also believed that the police were desperately seeking to divert attention from the alleged disgraceful and criminal roles played by their officials, in the snatching and stuffing of ballot boxes during the December polls.

Tam-George said the state would not succumb to what he called the “juvenile antics” of the All Progressives Congress (APC) and its security surrogates.


thenation
Posted by MAN ABOUT TOWN at 10:58 PM