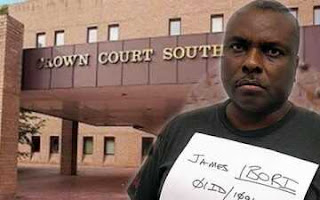 A former Delta State governor, James Ibori, who returned to Nigeria on Saturday after serving out his jail term in the United Kingdom December last year, has denied being deported by the British authorities to Nigeria.
He described the reports as malicious and misleading.
Ibori also reiterated that the trial leading to his conviction
by a British court was marred by corruption and he would challenge his conviction.

The former governor, who spoke through his media assistant, Mr. Tony Eluemunor, in a statement issued on Monday, also denied knowledge of a Twitter account being rumoured to be operated by him.
The statement read in part, “Ibori wishes to correct the impression created by some news reports that he was deported from the UK. Even though I had wanted to publicise my return to Nigeria so that wrong meanings would not be read into the public interest that I knew my presence in Nigeria would elicit, I never wanted any crowd to gather because of me as I do not want to disturb Nigerians in the course of their duties, all my efforts to keep the trip secret failed. The airline that brought me to Nigeria is known to Nigerians, so also was my arrival at the airport.
“So, it would be easy to verify that I was not deported because the deporting country’s officials would always hand over deportees to the Nigerian Immigration officials and documents would also be exchanged. Those who have chosen to report lies, and claim that I was deported know that no document exists anywhere in the world to back up those malicious claims.”
The statement further explained that Ibori was duly granted leave to exit Britain by the UK authorities ‘voluntarily’  as there were documented letter between his lawyers and the British Home Office.
“Most of all, a record of documented letters between Ibori’s solicitors and the British Home Office exists which proves beyond all reasonable doubts that Ibori was granted leave to exit Britain ‘voluntarily’, and he announced, as was reported by both Reuters and the BBC, and several Nigerian news outlets that he would return to Nigeria in a matter of days.
“He did not announce the exact day so as to avoid crowd control challenges for the security services,” the statement added.
On the Twitter account, Ibori said he was informed of the account on Sunday afternoon, adding that he had no knowledge of the Twitter handle @ChiefIbori, which had his image as the profile picture

Punch
Posted by MAN ABOUT TOWN at 9:57 PM