All The Money Seized From Raid Of Judges Homes – DSS

The Department of State Services says it recovered over N270m from the houses of the judges it raided late on Friday and in the early hours of Saturday. 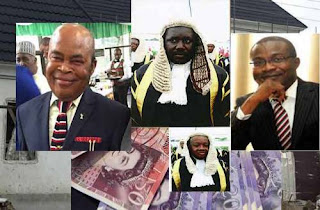 The agency said this on Saturday, while explaining the reason for its widely-criticised raid, during which over four judges were arrested.

The agency, however, accused a judge in Rivers State of hiding $2m, vowing that it would recover the cash.


A senior officer of the security agency, Mr. Abdullahi Garba, who spoke with journalists in Abuja on Saturday, insisted that the action would be sustained.

Garba said, “The DSS action is in line with its core mandate, as we have been monitoring the expensive and luxurious lifestyle of some of the judges, as well as complaints from the concerned public over judgments obtained fraudulently and on the basis of money paid.

“The judges involved were invited, upon which due diligence was exhibited and their premises searched. The searches have uncovered huge raw cash (sums) of various denominations, local and foreign currencies, with real estate worth several millions of naira and documents affirming unholy acts by these judges.”

While saying some of the judges had made useful statements on the allegations against them, he added that a few of them declined.

He added that in one of the states where the operations were conducted, intelligence report indicated that a judge had the sum of $2m in his house.

Garba said, “When he was approached for due search to be conducted, he in concert with the state governor mobilised thugs against the DSS team.

“The team restrained itself in the face of unbridled provocative activities by those brought in by the governor. Unfortunately, the judge and the governor also engaged the tacit support of a sister security agency.

“The service surveillance team noticed that upon frustrating the operation, the judge, with the active support of the governor, craftily moved the money to an unknown location, which the DSS is currently making efforts to unravel.”

Garba further declared that the current operation would be sustained and followed “till sanity and sanctity are restored to the esteemed third arm of government and public confidence is regained.” He refused to take questions after the briefing.

The Nigerian Bar Association, however, condemned the actions of the agency, declared a state of emergency, and demanded the unconditional release of the judges arrested.

The NBA made it position in Lagos at a news briefing addressed by its president alongside four past presidents – Chief Wole Olanipekun (SAN), Dr. Olisa Agbakoba (SAN), Mr. J.B. Daudu (SAN), and Augustine Alegeh (SAN).

NBA President, Abubakar Mahmoud (SAN), said two Supreme Court justices, Inyang Okoro and Sylvester Ngwuta, were “abducted”, stressing that it was not the responsibility of the DSS to arrest judges.

“We, therefore, call on President Muhammadu Buhari to immediately caution all the state security agencies and to respect the rule of law and follow due process,” he said.

“On any issue affecting the judicial officers, there are established procedures for handling them and we demand that this constitutional process be obeyed.”

He added, “Given the unfolding nature of the event and the seriousness of the situation, the NBA hereby declares a state of emergency as it affects the affairs of the judiciary and I hereby constitute a crisis management team, comprising all past presidents of the association.

“I want to, on behalf of the association, make the very following clear and unequivocal demands: we demand the immediate and unconditional release of all the judges abducted from about 9 pm yesterday (Friday).

“The release must be done immediately and without any conditions. Two, we demand that the Department of State Services limit itself to its statutory and constitutional responsibilities. I’ll be meeting with the CJN later tonight or tomorrow. There will be consequences if these demands are not met.’’