Supporters of Eyitayo Jegede, candidate of the Ahmed Makarfi faction of the Peoples Democratic Party (PDP), are currently on the streets of Ondo, protesting the decision of the Independent National Electoral Commission (INEC) to choose his rival. 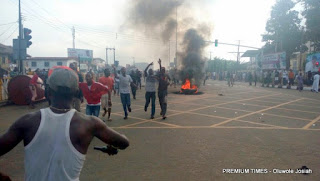 Citing a court order, the electoral body announced Jimoh Ibrahim of the Ali Modu Sheriff faction as the flagbearer of PDP in the November 26 poll.
A resident of Akure told TheCable that the protesters have vowed to remain on the streets until INEC reverses the decision.
Security personnel comprising men of the Nigeria Security and Civil Defence Corps (NSCDC), Nigeria Police Force, and the Nigerian Army, have reportedly mounted strategic places across the state.
“Many roads have been blocked; there are bonfires all around, and young people are trooping out in numbers to protest INEC’s choice of Jimoh Ibrhaim,” a resident told TheCable.
“They are chanting Jegede la fe (it’s Jegede we want). At a point, the police fired teargas canisters to disperse them, but they regrouped after about 40 minutes.

thecable
Posted by MAN ABOUT TOWN at 6:01 AM