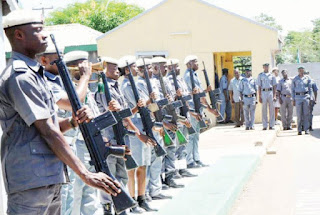 Twenty-nine (29) Senior officers of the Nigeria Customs Service have been dismissed for various acts of gross misconduct, the service announced Thursday.

The dismissed officers are among 44 senior officers who were punished for actions capable of compromising national economy and security, Customs said in a statement.

Twenty-nine (29) Senior officers of the Nigeria Customs Service have been dismissed for various acts of gross misconduct. The dismissed officers are among forty-four (44) Senior officers who were punished for actions capable of compromising national economy and security.

“Ten (10) other officers were retired from Service, while the appointment of one (1) was terminated. Four (4) officers were given written warnings to be of better conduct while another 4 officers who were investigated and tried for some offences were exonerated. Four (4) of the officers who got the hammer were of the rank of Deputy-Comptroller of Customs, while five (5) were Assistant-Comptroller. Others were seven (7) Chief Superintendents of Customs and four (4) Superintendents, among others.

“Comptroller-General of Customs, Col. Hammed Ali (Rtd) had made it clear upon his assumption of duties that the Service will not compromise on Corruption and Indiscipline among the officers corps. In line with this, the structure and process for investigation of offences was strengthened to handle cases reported promptly and professionally. “We will give all officers fair hearing in line with the principle of natural justice. We will however insist that sanctions be punitive, not only to match the offence committed, but to serve as deterrent to others”, the CGC remarked at Management meeting convened to consider the report of the Disciplinary Committee that investigated the cases.

“The process leading to the actions taken on the officers was painstaking in line with the Public Service Rules (PSR). All the officers were served with Queries indicating offences committed, before they made appearances before the Special Investigation Committee. The Committee’s recommendation was discussed and approved by the Customs Management. The recommendation was thereafter referred to the Presidency for ratification, in the absence of a substantive Board for the Nigeria Customs Service. All the officers affected in the exercise have been communicated accordingly.

“The Comptroller-General warned officers that punitive sanctions will continue to be used to discipline officers who refuse to embrace change.

“Officers affected in this exercise were investigated for involvement in improper examination and release of containers without proper documentation and payment of duties, illegal release of goods in advance before the arrival of vessels, collection of bribe to release prohibited items, release of export prohibitions, fraudulent sale of seized items, use of fake certificates and bribery to secure auctioned goods.

“Last week, seventeen (17) Junior officers were similarly dismissed from service for offences like bribery, drug addiction, use of fake certificates and absence from duty.”

Premiumtimes
Posted by MAN ABOUT TOWN at 9:08 AM