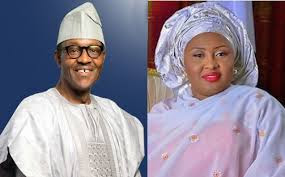 In responding to his wife’s outburst that that his government had been hijacked by “some cabal” who were not with them from the very start, President Buhari said: “She belongs to my kitchen, my living room and the other room.”


But speaking in Berlin, Germany yesterday, as part of his state visit to the country, President Buhari was reported to have laughed off her allegations, saying: “I don’t know which party my wife belongs to, but she belongs to my kitchen and my living room and the other room.

“His comments to reporters in Germany promoted German Chancellor Angela Merkel, standing at his side, to give him a short glare and then laugh,” according to an online news portal, Associated Press (AP).

Speaking further, President Buhari said he hopes his wife would remember that he ran for president three times before succeeding on the fourth effort. “So, I claim superior knowledge over her and the rest of the opposition, because in the end I have succeeded.

It’s not easy to satisfy the whole Nigerian opposition parties or to participate in the government.” However, the presi-dential spokesman, Mallam Garba Shehu, said President Buhari respects women, citing the appointment of the Finance Minister, Mrs. Kemi Adeosun, as a demonstration of that. Reacting to the media frenzy ignited by Buhari’s statement that his wife Aisha belonged in the kitchen, Shehu said that Buhari was only joking.

“My friends, can’t a leader get a sense humour anymore? Mr President laughed before that statement was made. “He was obviously throwing a banter. Politics sometimes should be spiced with humour.

Those of us close to him know there is never a dull moment with him. “Mr. President respects the place of women in our society. He believes in the abilities of women. One of Nigeria’s most sensitive office today is headed by a woman, Mrs. Adeosun. This is an evidence of the confidence he reposes on women,” he said.

2019: I may not support you, Aisha warns Buhari

Prior to President Buhari’s response to his wife’s outburst, Aisha had warned him that she may not back him at the 2019 election unless he shakes up his government. Aisha, in the interview published by BBC yesterday, said the president does not know most of the top officials he has appointed.

The President’s wife expressed fear of rebellion from the 15 million people who voted for her husband, stressing that those who worked for the president have been abandoned for those who don’t even have voters card. She said: “The president does not know 45 out of 50, for example, of the people he appointed and I don’t know them either, despite being his wife of 27 years.

“Some people are sitting down in their homes folding their arms only for them to be called to come and head an agency or a ministerial position.” In the BBC interview, the First Lady refused to name those who had hijacked the government, saying: “You will know them if you watch television.” On whether the president was in charge, she said: “That is left for the people to decide.”

Aisha also said her husband had not told her whether he would contest the 2019 election. She said: “He is yet to tell me but I have decided, as his wife, that if things continue like this up to 2019, I will not go out and campaign again and ask any woman to vote like I did before. I will never do it again.”

Following this, it was gathered that anxiety heightened in the Presi-dential Villa, Abuja, over the interview granted by Aisha. Confirming this last night, a close aide of the President who prefers his name not be mentioned in print, told our correspondent that some of Buhari’s appointees, including cabinet members were currently jittery and as such, not sure of what would happen next.

There has been calls from prominent Nigerians for the President to rejig his cabinet and inject more competent individuals that will assist the government succeed in delivering on its developmental programmers.

According to the presidential aide, most of the cabinet members have not been given open access to the President because of the manner in which they were nominated into the government.

“On the directive of the President, every minister reports directly to the Chief of Staff except on rare occasion when it becomes necessary for oneon- one discussion about memos.

“This kind of process is different from what obtained in the past and has not given majority of them the confidence they need to function effectively. With the statement from the President’s wife, most of them are afraid,” the source stressed.

Our correspondent gathered that most villa staff clustered in pair yesterday, discussing what effect the develop-ment could portend to the government of the day in terms of changes that could follow.

BBC ‘defied pressure’ to publish interview It was also gathered that the BBC Hausa Service was under intense pressure from President Buhari and members of “his kitchen cabinet” to pre-empt broadcast of the interview granted by his wife.

Dependable sources said the President had reached out to his wife, who was currently in London, to stop granting further interviews to the media. The organisation, it was learnt, had defied pressure from the Presidency and National Assembly to stop it from airing the interview.

The Deputy National Publicity Secretary of the All Progressives Congress (APC), Timi Frank, has said comments made by Mrs. Aisha Buhari, was not meant to discredit the current administration but to sound a note of caution for the betterment of  Nigerians and the country at large.

The APC spokesman in a statement yesterday, warned oppositions not to rejoice or misinterpret the said interview adding that the President’s wife spoke out the minds of many party men and women who felt sidelined in the present government. Frank said: “I think Mrs. Buhari deserve commendation because she is actually speaking the minds of not only the party members but Nigerians.

“What Mrs. Buhari has said is not different from what some of us have been saying that it is high time the President shake-up his cabinet and bring in people who understand the manifestoes of the party and could help the party deliver on its change mantra, especially, the economy of the country needs an urgent attention.

“Some of our leaders like the Senate President Dr. Bukola Saraki, have made this same observation in the past and I think they meant well for the administration and the country.

I will also join them in appealing to the president to do the needful. “Nigerian women in politics and other wives of president in the world have a lot to learn from what Mrs. Buhari has done.

We should not forget in a hurry that this is what the former first lady Mrs. Patience Jonathan failed to do to her husband when few people hijacked his government and brought the government down.”

...newtelegraph
Posted by MAN ABOUT TOWN at 3:15 AM