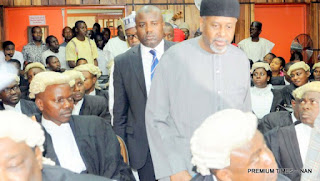 Adeniyi Ademola, a judge of the Federal High Court in Abuja, and one of those arrested by operatives of the State Security Service, on Tuesday withdrew from presiding over the trial of former National Security Adviser, Sambo Dasuki.

Mr. Ademola was arrested by the SSS on October, 7 after his house was ransacked following allegations of corruption.

The operatives said they found huge some of money in local and foreign currencies at his residence during the raid.

Days after the raid, Mr. Ademola wrote the Chief Justice of Nigeria, saying he was attacked unjustly.

He sited his previous rulings on Mr. Dasuki during which he granted him bail. The SSS did not obey the order.

Mr. Ademola also mentioned his previous decisions on a case involving a leader of the Indigenous People of Biafra, Nnamdi Kanu, as reasons for his arrest.

Mr. Ademola had presided over various cases on Monday, before his latest decision to resign from Mr. Dasuki’s case.

He said the reason for his withdrawal is the current allegations of corruption levelled against him.

“I am sure you are conversant with what is going on the last seven days. One of the allegations being made against me is that I received some money from Sambo Dasuki. This is the allegation of the SSS.

“I thought I should tell the counsel what is being said.”

“Before I announce my decision, let me ask the defendant (Dasuki) some questions,” Mr. Ademola said.

‎He then began a series of questions and answers between himself and Mr. Dasuki in an apparent effort to show his innocence.

Ademola: Do you know me at all?

Dasuki: Before I came to this court, not at all.

Ademola: Did you at any time give me money?

Dasuki: Not that I am aware of.

Ademola: Did you send your lawyers to give me money‎?

Dasuki: Not at all.

Ademola: Did you give money to any of my relatives‎?

Dasuki: Not at all, maybe the SSS alleging that did,” Mr. Dasuki said

...premiumtimes
Posted by MAN ABOUT TOWN at 5:05 AM