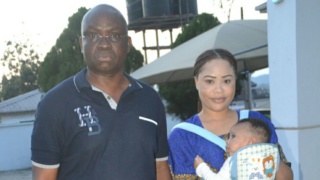 SaharaReporters learned that Mr. Fani-Kayode's girlfriend arrived in Ekiti and attempted to withdraw funds from an account linked to slush provided by detained former National Security Adviser, Dasuki. The account is part of the subject of the former Aviation minister's ongoing prosecution for fraud at a Federal High Court in Lagos. Saharareporters learned that security officials concluded that an account opened at Access Bank by one "Sonia  Chikwendu Precious," with account number 0024425113, was linked to money laundering. The account was flagged after security and anti-corruption agents determined that it was one of the several accounts into which another former minister, Esther Usman Nenadi, paid illicit funds. When Fani-Kayode's girlfriend arrived at Access Bank in Ekiti to withdraw funds, bank officials contacted agents of the Economic and Financial Crimes Commission (EFCC). The EFCC had earlier instructed the bank to alert security agents whenever anybody showed up to carry out transactions the account. Our correspondent learned that Ms. Precious was with her eight-month-old baby at the time of her arrest. Our source said EFCC officials in Lagos asked the Divisional Police Officer in charge of a police station near the Ajilosun branch of the bank in Ado Ekiti to release her on bail as EFCC agents in Lagos were unable to get to Ekiti on time to take a statement from the nursing mother. Our source said the DPO contacted Governor Fayose instead of going to the bank who then rushed to the bank to free Mr. Fani-Kayode's girlfriend. After freeing her from the bank, Mr. Fayose then marched back to the bank premises to close down the bank, swearing that the bank would never operate in Ekiti during the remainder of his tenure as governor.  Several months ago, Mr. Fayose also humiliated Zenith Bank officials in the state, demanding that one of the bank managers go on his knees to apologize for exposing his laundering of slush funds provided for gubernatorial campaign purposes by former President Goodluck Jonathan in 2014.


sahareporters
Posted by MAN ABOUT TOWN at 12:39 AM