Former Nigeria defender Taribo West has dispelled news on the social media and websites claiming he died in a South African hospital on Thursday. 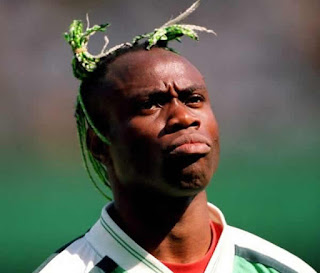 “The former defender of Nigeria Super Eagles who is now a pastor and founder of Shelter in The Storm Miracle Ministries of All Nations has died in South Africa early morning of Tuesday, South Africa Radio reports.

“He passed on at 42. According to the reports, West was flown into South Africa for medical treatment but did not state what he was diagnosed of. His body has since been sent for autopsy. He is best remembered for his various unusual and colourful hairstyles,” smithrise.com reported.

But in an interview with SATURDAY PUNCH, the ex-footballer who had stints at European giants AC Milan, Inter Milan and Kaiserslautern said he was alive and well, and never visited South Africa.

He said he first got wind of the news while at home meditating ahead of his church programme on Sunday.

“I received calls telling me to check Facebook about news of my death. I saw reports of my death and people were commenting. I just laughed. I’ve never received such number of calls all my life. From US, UK, all over the world,” the Atlanta ’96 Olympics gold medallist said.

He added that he had a premonition that something ‘evil’ was going to happen, after a spiritual attack.

Speaking further, Taribo said he is relieved and happy after God used the news to reunite him with old friends and acquaintances.

“All the people I had lost contact with were calling, thinking I had kicked the bucket. But it helped me in reuniting with these people. That’s God’s work, when the devil means evil for you, God turns it to good for His children. I didn’t travel. I only went to the American Embassy last Tuesday; I never travelled after that,” Taribo said.

Meanwhile ex-teammates of Taribo and journalists have urged the public to dispel rumours of the death of the ex-Enugu Rangers’ centre-back.

The Radio Catalyst slammed gongnews.com slammed for posting false news on twitter.  “Gongnews is fake brand giving out fake news to the world. Taribo West is not dead.”

Victor Ikpeba tweeted, “My brother Taribo West is alive. Please ignore rumours that he is dead.” Edema Fuludu wrote, “I just spoke to Taribo West and he is hale and hearty.”

Austin Okon-Akpan added, “It’s so disgusting when people put out silly talks on social media. PLEASE TARIBO WEST IS DOING JUST FINE. Just got off the phone with him.”

Journalist Colin Udoh also tweeted, “WARNING: Ignore rumors of the death of Taribo West. I have spoken to him. He is alive, hale and hearty.

punch
Posted by MAN ABOUT TOWN at 2:44 AM