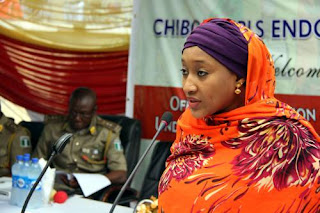 The #BringBackOurGirls group has distanced itself from the signing of a Memorandum of Understanding (MoU) and Fund Raising Project of Hadiza Buhari-Bello, daughter of President Muhammadu Buhari, who doubles as the President of Africa Support and Empowerment Initiative (AFRISEI), in conjunction with the Peace Corps of Nigeria (PCN) in Abuja.

The group said following repeated inquiries from the media, it stumbled upon information on an event tagged “Official Inauguration and Signing of Memorandum of Understanding (MoU) on the Chibok Girls Endowment Project” organized by the “Peace Corps of Nigeria” and “Africa Support and Empowerment Initiative” led by Hadiza Buhari-Bello.

The BBOG group declined lending its brand to such an arrangement, saying in a statement: “We are shocked, perplexed and completely dumbfounded to see the bold inscription of our hard-earned name, #BringBackOurGirls, on the event’s backdrop. We state categorically that we are not party to the said event and have absolutely no information about its origin. We urge the general public to disregard attempts at linking our movement to this highly suspicious event.

“After 902 days of painstaking advocacy, it is disheartening and unfortunate to suddenly see attempts by external actors to use our name for selfish purposes. We have carefully built our reputation as a well-organized and disciplined global movement that is completely self-funded.“

The statement added: “The deliberate decision to remain funded by sacrificial contributions of members for our very negligible needs is the reason we are solely a Citizens’ Movement and not an NGO. It will be highly injurious to allow our name to be dragged in the mud at this point. We, therefore, demand an immediate retraction and unreserved apology from the organizers.

“Together with our lawyers, Femi Falana & Co., we are considering a response to this attempt to smear our movement. We call on the general public and law enforcement agencies to be on the lookout for unscrupulous persons who may already be/are planning similar nefarious acts to deceive the local and international community.

A Non-Government Organization named Africa Support and Empowerment
Initiative (AFRISEI) signed an agreement with Peace Corps of Nigeria and inaugurated an Endowment Fund in support of 21 Chibok girls released by the Boko Haram terrorist group. The event, which was held at the National Headquarters of the Peace Corps at Gwarinpa, Abuja, was graced by Hadiza Buhari-Bello, who noted that AFRISEI is a charitable organization that is committed to empowering the youths and the less privileged in the area of job creations and skill acquisition.

According to her,  “ it is necessary for the government to be assisted in ensuring that fund is raised to champion the course of rehabilitating the released Chibok girls to a concluding success. Our organization, Africa Support, and Empowerment Initiative, therefore, register our allegiance and tender our willingness to support the Federal Government in rehabilitating these girls. With support from our stakeholders, Peace Corps of Nigeria and Medical Laboratory Science Council of Nigeria (MLSCN), to carry out the free medical test for Hepatitis B&C, HIV, malaria, and sugar level on the girls.“

The National Commandant of the Peace Corps, Dickson Akoh, donated the sum of N3.5million as a token contribution by officers of the corps nationwide to the welfare and rehabilitation of the girls who have suffered an unprecedented trauma in the captivity.

Akoh stressed that the Federal Government needs more support now than ever before following the recent release of twenty-one girls whose rehabilitation and integration into the society is very essential. He noted that such exercise should not be left for the government alone but supported by all and sundry.

Saharareporters
Posted by MAN ABOUT TOWN at 1:38 AM