As the fairy tale romance brews and chars within the hearts of dreamy lovers so did the fabled good times bloom and fade from the lives of many a Nigerian billionaires. Ask Nestoil boss, Ernest Azudialu. 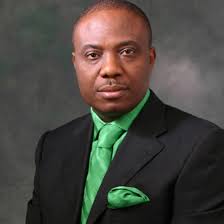 Luxury and the frills of acclaim takes a dip in the life of the
oil magnate even as you read. So stricken is he by the recession that he has begun to cut his coat according to available material.

Due to declining fortunes, Ernest no longer flies a private jet. He flies commercial planes now. His private jet has been taken away from him due to paucity of fund. As if that was not enough, Julius Berger, his preferred construction firm, has moved out of his site which is beside Folorunsho Alakija’s house in Ikoyi.

Ernest’s current plunge down the ladder of wealth and acclaim no doubt contrasts negatively with his rising profile of yesteryears. Years ago, he lived a life of enviable luxury; he traveled by private jets and flaunted a garage full of posh automobiles like the luxurious Lamborghini Aventador, the BMW High Security 760 a.k.a BMW Individual, and different brands of customized Rolls Royce. The recession has definitely dealt a hazardous blow on the Nestoil boss. Like several of his peers in Nigeria’s high society, his taste for luxury and the good life undergoes irredeemable transformation.