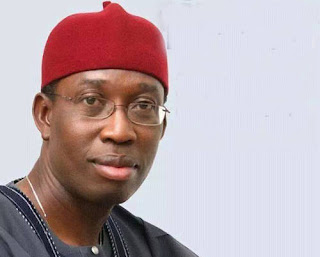 Delta state Governor, Mr. Ifeanyi Okowa has confirmed that he sustained injuries on his head in a domestic accident at the government house.

Speaking on Wednesday during a church service at the Government House Chapel, Okowa, however, dismissed the report that he was flown abroad for medical treatment after the incident

"The truth is that last Wednesday, I entered the bathroom in my office and one of the tiles fell off from the wall, and I had a minor cut on my head and I had two stitches, and it was treated, and I was ok. People know I am a workaholic, and that Is why it didn't stop me from working, I am hale and healthy.

"Am told that certain section of the social media reported that I have been flown abroad for medical treatment. When and how did that happen? It is unfair and uncharitable to disseminate false information. It is very unfortunate at this age and time that people will intentionally misinform others when there are opportunities to find out what might have happened.'' Okowa lamented.

Okowa, however, appealed to the media to imbibe the culture and tenets of the noble profession through a thorough investigation of issues before publishing.

Government House sources told SaharaReporters that for almost a week now after the incident the governor has not been seen in the office saying today's marks the first time Okowa appeared in public.


..saharareporters
Posted by MAN ABOUT TOWN at 6:25 AM