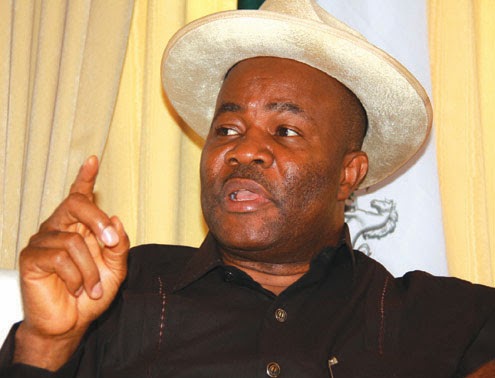 Ahead the 2015 elections, Governor of Akwa Ibom, Mr Godswill Akpabio just suffered a loss of support - amongst his kinsmen.

Here is why and how as sourced.

Political leaders from Essien Udim Local Government, the home town of Akwa Ibom State’s Governor Godswill Akpabio, have condemned him over his alleged disrespect and disloyalty to his predecessor, Victor Attah, and one of the state’s elders and chieftain of the ruling Peoples Democratic Party (PDP), Don Etiebet.

'The Essien Udim Council of Political Affairs, an umbrella platform for all political leaders from the area, said in a statement Saturday that it completely dissociates itself from disrespectful utterances credited to Mr. Akpabio against the senior citizens and other political leaders in the state.

The governor has consistently criticized those opposed to his ambition to select his successor, declaring that nobody in the state, including the elders, would stop him from realizing his objective come 2015.

He is quoted to have said that any aspirant in the forthcoming governorship race in 2015 in the state who does not receive his blessings would be deemed to have entered the race through the backdoor and deserves to die.

But the Council, in a statement issued by its President, Aniefiok Akpan, at the end of its General Meeting at Afaha Ikot Ebak, headquarters of Essien Udim Local Government Area, said such utterances by the governor is capable of pitching him against elders in the state.

Although it noted the infrastructural development effort of the state government, the Council drew attention to several other parts of the state, including Essien Udim, yet to experience any form of transformation.

“Council notes the high rate of hunger and poverty in Akwa Ibom State, and advises that His Excellency, Chief Godswill Akpabio, releases funds into the state economy through payment of salaries to civil servants and debt to local contractors,” the council said in a statement.

The Council said its position followed several consultations with elders, women and youth of the Local Government on the current political developments regarding the forthcoming PDP primaries for the 2015 governorship election in the State.

He said Council was worried that the rising political tension in the state could escalate to a point where the entire political process, peace and governance in the State could be disrupted, if not checked.

“Chief Godswill Akpabio’s utterances, the Council wishes to point out, represent his opinion as a person and as a governor, and by extension his government, and that those utterances do not have the backing of Essien Udim people who are generally peaceful and respectful of elders,” the Council said.

According to the Council, the apology was necessary in view of the humiliation they suffered in Mr.
Akpabio’s hands, in spite of their individual and collective political investments on him that took him to where he finds himself today in the politics of the State and Nigeria.

'Calling on the governor to refrain from any further public utterance or action that could deepen the political and ethnic tension in Akwa Ibom State, the Council said he should rather see himself as a leader and father to all, and desist from endorsing, funding and campaigning for any of the PDP governorship aspirants in state.

Mr. Akpan urged the governor to immediately initiate a process for genuine reconciliation among Ibibio, Annang, Oro and other ethnic groups in the state, as well as the different political factions within PDP to ensure a peaceful and orderly poll next year.

But the political rift between the governor and his opponents appeared to have heightened tension in political circles in the state after Mr. Akpabio described Mr. Etiebet as ignorant, following his criticism of his management of the state’s resources.

Mr. Etiebet had cited the monthly allocations from the federation account to Akwa Ibom to buttress his assertion about the state’s abundant wealth.

He also accused the governor of making a mess of the federation account through “extreme profligacy, arbitrary and non-budgetary spending, awards of inflated contracts and without due processes, lack of accountability in budget implementation, lack of information and transparencies on total receipts of revenues from all sources and other financial recklessness”.

Making reference to allegations by the Minister of Finance, Ngozi Okonjo-Iweala, who said that the state’s resources were poorly managed, Mr. Etiebet described the governor’s claim of “uncommon infrastructural development in Akwa Ibom” as nothing but “uncommon propaganda for the uninformed”,

The former Minister of Petroleum Resources said Mr. Akpabio’s determination to install his successor by shutting the party’s doors against his perceived political enemies was a clever ploy to cover his tracks'
Posted by MAN ABOUT TOWN at 4:53 PM