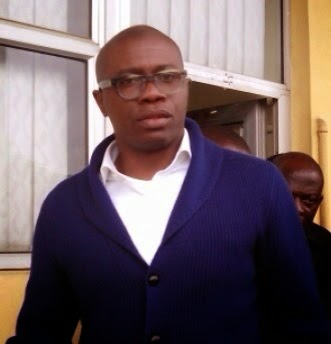 
Here are the details as provided by news breaker, thecapital.

'With the damning case of alleged involvement in the oil subsidy scam hanging over his head, the head honcho of Ontario Oil & Gas Limited, has relocated his family to Geneva, Switzerland to start a new life. Those who have being there confirmed that the house is a well-furnished mansion. That's Walter for you. He likes the good life, especially for his family.

Those who expected that Walter would go underground when the Economic and Financial Crimes Commission, EFCC, listed him once again, among those involved in the oil subsidy scam are now wondering at his newfound happy-go-lucky demeanour. Yet, he has not been given a clean bill of health by the anti-graft agency.  Perhaps they expected him to go around wearing a façade of gloom and doom but Walter is not allowing the fleeting troubles rock his world.

However, He has moved his family to a safer place. Walter is a power dresser. Though a conservative in outlook, he is a dandy and he has eyes for designer suits. Saville Row bends to his will whenever he makes his infrequent whistle stop visits.

Despite the shield and myth that money has created round him, Walter is reportedly a down-to-earth family man whose philanthropic inclination compares favourably with his boardroom acumen. No wonder he has been described as a lady-killer whose aura effortlessly draws the finest species of womenfolk ranging from blacks, blondes to brunettes, Orientals and occidentals.

Interestingly, however, “What! Must I hold a candle to my shames?” said Jessica, an interesting character in late William Shakespeare’s literary classic, “Merchant of Venice.” Jessica’s outburst, pregnant as it is, seemed to have found rhythm in the situation of his beautiful wife, Otsaye.

She would not hold a candle to her shame, shameful as it is that the EFCC has turned itself into a leech on her very hardworking hubby. In the wake of investigation of allegations of subsidy fraud against her sweetheart, Otsaye wouldn’t want her embarrassment to become an item of entertainment to a gloating public. She would rather take her case to God Almighty and seek His miraculous intervention in her husband’s case. Thus is the situation of the wife of Walter that has seen her evolve from a social butterfly to a prayer warrior of sort in Switzerland.

These are indeed trying times for the Watgbasomas and many would join them in seeking God’s intervention in their predicament'
Posted by MAN ABOUT TOWN at 3:23 AM