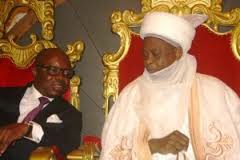 THE Sultan of Sokoto and President-General, Nigeria Supreme Council for Islamic Affairs, Alhaji Sa’ad Abubakar III has commended Delta State Governor, Dr. Emmanuel Uduaghan for promoting inter-ethnic and religious harmony in the country.
Alhaji Sa'ad Abubakar III who is in Asaba to chair a lecture on Anger Management being organised to mark the Governor's 60th birthday in Asaba made the observation when he paid a courtesy call on Dr. Uduaghan at the Government House on Monday.
He described Governor Emmanuel Uduaghan as a trail-blazer in engaging in actions that unite Nigerians despite their ethnic and religious persuasions.
“I am in Asaba to take part in the discussion on issues affecting our nation. We should thank the Governor for thinking in that direction, we should continue to talk, if we want the country to be great, we should close ranks.
"To find solution to Nigeria’s problem, we must come together and talk to one another. The more we talk to one another, the more we understand one another, I believe strongly in the application of dialogue to settling all issues,” reiterating, “we must continue to look at ourselves as one and as the two major religions in the country preach, we must love one another.”
He observed that peaceful co-existence and harmony could only be achieved by Nigerians in engaging themselves in frank dialogue rather than relying on persons that do not understand the cultural, religious and ethnic colouration of the country.
The Sultan stressed, “we must come together to fight our common enemy because disease does not know religion or tribe just like poverty.
"We are Nigerians by virtue of God’s creation, we must continue to look at ourselves as brothers, love one another as we are created by one God despite our different tribes and religion.”
Governor Uduaghan thanked the Sultan for coming to Delta State for the lecture and described the Sultan as a bridge builder who believed in the unity of Nigeria .
"Since  you assumed the throne of your forefathers as the Sultan, you have been one of the greatest Ambassadors of peace in Nigeria, you have moved across this country and beyond preaching peace. 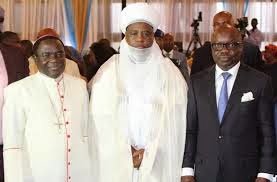 “I know that God will reward your efforts to give us peace in Nigeria and I want to assure you that Delta State will continue to partner with you in bringing peace to Nigeria,” the Governor said, adding that his administration would continue to engage in actions that would unite Nigerians.
Posted by MAN ABOUT TOWN at 3:12 AM