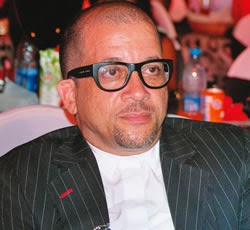 The model matrimony of Eyo Effiong and his wife, Apinke is no more.

The definition of a happy home is said to have succumbed to ínterference .

Here are the details of the development that has forced Eyo and Apinke to relocate to separate bases.

'Other miseries only speak but heartbreak shrieks out. Yet each couple extinguishes the flames of their love as it pleases them. Some do it with a bitter look, some with a flattering word. Some do it with a kiss and others by infidelity. Ask Eyo and Apinke Effiong, the estranged couple would definitely have their pick from the pack.

It is often said, marriage has many pains. However, for Lagos famous dude, Eyo Effiong and his wife Apinke, the pains might be unending as the union of the former model couple and lovebirds have degenerated into an acrimonious enterprise.

Disturbing rumours about their now turbulent union were initially dismissed by very close friends and family members as the handiwork of mischievous persons but following recurrent acerbic gossip about their estrangement from each other, friends of the couple can no longer offer a defensible explanation.

Their marriage took an unfortunate turn, according to sources close to the duo, as a result of the persistent meddling of an overbearing member of their family in their marriage. The meddler is allegedly uncomfortable with the manner in which Apinke has been running Eyo’s home. The husband and wife are now in the bleak throes of divorce, as opposed to the joyful matrimony they once enjoyed, to the extent that people have started wondering if their marriage crashed over familiar brimstones in lives made too affluent and easy.

However, in a bid to escape the miseries of their failed marriage, Eyo, who celebrated his birthday days ago, has now decided to stay more in Abuja, his second home and Apinke has moved to London. '
Posted by MAN ABOUT TOWN at 4:04 AM