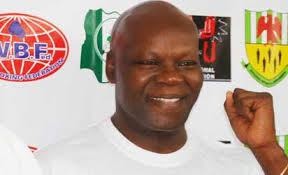 And he is pointing accusing fingers at the C.E.O of Nexim Bank, Robert Orya as the architect of his ordeal.

Bash Ali has several times alleged that Orya demanded a bribe of $10 million out of the $30m which President Goodluck Jonathan had asked the bank to release to the Local Organising Committee, LOC, of the Guinness Book of World Records fight which the boxer plan to stage in Nigeria.

Bash Ali said: “On Wednesday, 18 February, NEXIM Bank’s Executive Director, Customer Service, Bashir Wali invited me for a chat, while waiting, the MD, Robert Orya, who on 6 May 6, 2014 asked for a private chat which I turned down drove in, saw me and members of the LOC and ordered security to beat us up. The security men broke the head of our driver and damaged the vehicle.”

According to the boxer, he and some members of the LOC were arrested by the police and taken to the Federal Secretariat Command of the force in Abuja and were later transferred to the FCT Command before being finally taken to SARS on the same Wednesday.

“On Thursday we were arraigned at the Magistrate’s Court, Cotonou Street at Wuse Zone 6. At the end of the proceedings the Chief Magistrate agreed to grant me bail of N1 million with surety of a Level 10 Federal worker, which I refused. This forced the police to remand me at Kuje Prison till 4 March when the case will come up again.

“Fellow Nigerians, is this how we will allow corruption to continue in our dear country?” said Bash Ali through a text message he sent out at the weekend.

P.M.NEWS Sports gathered from a police source that Bash Ali is being tried for criminal trespass, obstruction in public way, wrongful restraint and criminal intimidation, contrary to Sections 79, 85, 348, 194, 266 and 397 of penal code.

The source said that Ali was arrested on Wednesday at about 2p.m after one Mr. Bisong Peter of NEXIM Bank reported him at the Central Police Station. He was arrested alongside five others when he trespassed into the premises on the bank, using a bus to block the entrance into the building, thereby restricting staff from getting into their offices.
Posted by MAN ABOUT TOWN at 10:38 PM