Inside Details Of Why Bayelsa Gov Seriake Dickson May Not Retain His Seat! 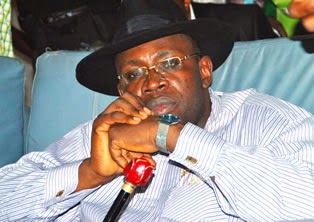 Outside of his raging battle with Dame Patience, wife of President Goodluck Joathana there are other major forces buffeting the re election ambition of Governor of Bayelsa state Seriake Dickson.

Here is an insight into why he may not retain his seat.


Unfolding scenarios in the political development of Bayelsa State indicate that Governor Seriake Dickson’s bid to return to the Government House in 2016 is not a fait accompli, writes Simon Utebor

The ability of Bayelsa State Governor, Mr. Henry Seriake Dickson, to ride roughshod over all opposition in the state will determine his political survival and his return for second term.

Dickson cannot pretend that the odds against his second term ambition are not gargantuan and they will take him a deft diplomatic manoeuvring to surmount them.

The governor himself has started alluding since last year that he was not oblivious of some opponents scheming to wrest power from him.

However, he boasted then that the state was a beacon of hope for the Ijaw people and would not be surrendered to vultures and buccaneers.

He had said the state would continue to be ruled by those who understand why it was created and the supreme prices paid by some people before its creation.

While warning his opponents that he was battle ready to actualise his second term ambition, the governor sent a note of caution to them that he remained a “tested warrior.”

He had said, “It is unfortunate that those who should know, those who have been the beneficiaries of this solidarity and unity are being carried away by political attention.

“In this business, we have tested warriors. I want to call on those dancing too early not to be like an antelope that dances too early and dances itself lame before the dance feast began.

“You can practise the dance, but don’t get tired before the feast. If they know how we confronted sitting authorities, they should have known better. When we are ready, we will show them who we are.”

His bold and tough stance notwithstanding, those rooting for his removal are hell bent on ensuring that he does not come back.

It is an open secret that the wife of the President, Dame Patience Jonathan, opposed Dickson’s second term ambition.

She was said to have preference for the Special Adviser to the President on Domestic Matters, Mr. Waripanmowei Dudafa.

Though observers said Dudafa is just a card the First Lady is flying, but at the end, the Senator representing Bayelsa Central District, Emmanuel Paulker, would be the First Lady’s favourite.

When Mrs. Jonathan resigned her appointment as Super Permanent Secretary in the state’s civil service in October last year, many believed that the resignation was a political statement that the battle line between her and Dickson had actually been drawn.

Ministry of Education sources had confided in our correspondent who broke the news then that the President’s wife resigned to enable her perfect her plan to frustrate the Dickson’s second term ambition.

Since then, the governor and Mrs. Jonathan have been locked in supremacy battle over the control of the Peoples Democratic Party structure in the state.

The recent PDP primaries in the state showed that Dickson had a firm grip on the party as the governor ensured that all his loyalists won in the contests.

The development was said to have angered the First Lady and her loyalists who had regrouped to perfect strategies on how to remove Dickson.

One of the strategies, it was learnt, was the hijack of the leadership of the state chapter of the Transformation Ambassadors from the governor’s supporters.

The governor, sensing that hijacking TAN from his loyalists could mar his electoral fortunes, has been on warpath with the group, culminating in the banning of TAN from Bayelsa.

He had, in a statement by his media aide, Daniel Iworiso-Markson, accused TAN of “promoting subversive activities and inciting crisis and divisions within the PDP in the state.”

He then ordered members of the group headed by a former deputy governor of the state, Werinipre Seibarugu, “to move their activities elsewhere.”

He said that the PDP, and not any other group, was the only recognised political platform saddled with the responsibility of leading the President’s campaign with him (governor) as the leader, noting with dismay that “the activities of TAN do not seem to serve the purpose for which it was created in the state.”

But TAN issued a disclaimer, saying in a statement by its Director of Publicity, Nathan Egba, that the governor’s directive was regrettable.

Egba had described the governor as a joker, saying he had no right to ban the organisation.

He insisted that Dickson lacked the power to ban TAN’s activities.

Egba said, “We are shocked because we find it hard to understand how a state governor would make such a statement in a democratic setting, as we have in Nigeria.

“There is nowhere in the Nigerian Constitution that gives any governor such powers. TAN in Bayelsa is, however, aware of plots by some over-zealous government officials to portray groups such as TAN, Women For Change Initiative and others in bad light.”

The second strategy, it was learnt, was the alleged defection of some aggrieved aspirants who could not get the PDP tickets during the primaries to the All Progressives Grand Alliance.

It was gathered that the move would provide an alternative platform for the aggrieved First Lady’s loyalists to test their popularity against the PDP during the general elections.

It is believed that even though Dickson and Mrs. Jonathan are playing the ostrich, the relationship between them is far from being cordial.

Besides the reported rebuffing of the governor by the First Lady during President Goodluck Jonathan’s birthday in Abuja recently, the shunning of Dickson during the presidential campaign rally in Yenagoa on February 6 painted a gory picture of an unending frosty relationship.

Dickson was said to have gone to visit Mrs. Jonathan at the Presidential Lodge in Bayelsa Government House but security details attached to the First Lady from Abuja allegedly turned him back.

A source, who craved anonymity, said when the governor got there, he was politely told the First Lady did not want to see him.

The source said the governor left the Lodge for his office angry and dejected.
Before the rally proper, speculation was all over the place that plan had been hatched by people loyal to the First Lady to stone the governor.

The governor, who was said to have got wind of the planned stoning, did not leave any stone unturned by perfecting security arrangement before and during the rally.

On the day of the rally, journalists, party supporters and others who thronged the venue, had a herculean task gaining access into the Samson Siasia Sports Complex.

Security operatives frisked people and prevented them from going into the arena with sachet and bottled water as part of the measures to prevent the governor from being pelted with them.

When Jonathan and his entourage arrived the venue by 2.15pm after his supporters had waited close to seven hours, Dickson was the first to mount the podium to welcome him.

The governor, while urging Nigerians to cast their votes for the President for re-election, showered encomiums on the First Lady, apparently to give indication that no cracks existed between them.

Those who read the countenance of the First Lady saw in her a woman not carried away by the governor’s adulation.

On the President, Dickson gave him the assurance that Bayelsa was totally for him and that he should not lose sleep over his electoral victory.

“There is no shaking for you. Do not lose any sleep at all,” he said.

However, Dickson got his first public disgrace in Bayelsa, as some groups in the crowd began to boo him.

The booing was so much that the governor became confused and his intention to suppress it by raising his voice pitch did not also work until he left the podium downcast.

As if that was not enough, the booing of Dickson resurfaced when Jonathan mounted the podium.

The President, not satisfied with the disaffection shown to Dickson, cleared the air on the alleged frosty relationship between the first family and the governor.

Jonathan said the relationship between his family and Dickson remained cordial and that anyone quarrelling with the governor should consider it as a fight against him (the President).

“I know that a few persons have infiltrated your midst and are spreading lies. You must work with the governor. For you to benefit anything from the federal level, you must work with him. Don’t allow anybody to deceive you. I am telling you as a brother, uncle and father.”

Still, not minding the President’s counsel, the booing of Dickson continued.

Though the reason for the booing of the governor could not be ascertained, it was learnt that those behind it were sponsored.

It was also learnt some Bayelsa residents were indignant at Dickson, popularly known as Countriman Governor, because of his alleged tight-fistedness, constant junketing and absence of ‘stomach infrastructure’ policy in the state.

In her remarks at the rally, Mrs. Jonathan tactfully avoided mentioning the alleged frosty relationship between her and Dickson.

She instead called on the women to intensify prayers for the re-election of her husband based on his performance and the fulfilment of the 35 per cent affirmative action for women in the country.

Some concerned Bayelsa residents, however, praised Dickson for developing the state in the area of infrastructure.

They said the governor’s performance since the administration was inaugurated on February 28, 2012, was above average when compared with those before him.

But a public affairs analyst, Daniels Igoni, said the people were angry with the governor because they were suffering in the midst of plenty.

He, therefore, urged the governor to initiate some stimulus packages for jobless youths.

Igoni said, “People are hungry and the governor is telling us he is building bridges, roads and what have you. Is it not people who are living that will enjoy the infrastructure? What Bayelsa people are saying by their action is that the governor should empower them.

“He was lucky the security people rose to the occasion. What people planned to do at the rally was to stone him. But as there was nothing to use to stone him, people expressed their indignation by booing him.

“He is our governor and we hope he will listen to us. All the people are saying is that things have never been this difficult in Bayelsa. Bayelsa residents are saying infrastructure building is good but stomach infrastructure should also be instituted.”