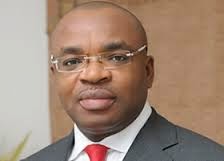 The student body just made an astounding donation - all of N100m to the campaign fund of PDP Governorship candidate in Akwa Ibom state, Udom Emmanuel.

The National Association of Nigerian students, NANS, Akwa ibom state chapter, have contributed the sum of 100 million to boost the governorship campaign of Deacon Udom Emmanuel. Announcing the donation at Ini, Comrade Aquila Akpan disclosed that the body comprising more than 10, 000 Akwa Ibom students in tertiary institutions came up with the contributions because the believe in the capacity of Udom Emmanuel to perform maximally once he becomes governor. Miss Akpan expressed the goodwill and prayers of the students for the success of the PDP, stating that they attended the rally at Ini as a show of solidarity.

On his part, the Ini Council boss, Hon. Elder Etetim Awatim declared that, his people will not be hoodwinked by the massive propaganda machine of the opposition parties in their desperation to win acceptability.

Hon. Awatim made this clarification while speaking at the mass rally for the PDP Governorship candidate for the February, 2015 General Election, Deacon Udom Gabriel Emmanuel. While welcoming Deacon emmanuel, he assured him of the total vote of the people and charged him to do them proud when he assumes office.

Presenting, Hon. Emmanuel Ekpenyong and Hon. Iboro Ekanem, both of who are billed to contest on the platform of the party for Ini State Constituency and Ini/Ikono federal Constituency respectively, the State PDP Chairman, Obong Paul Ekpo urged the people to vote the sterling PDP candidates into office.

Obong Ekpo also pleaded with the people to vote Governor Godswill Akpabio in as Senator representing Ikot Ekpene Senatorial District, maintaining that, the PDP remains the best choice for the people at all levels including the Presidency.

Presenting the PDP Governorship candidate to the people, the Director General of the Campaign Organization, Otuekong Idongesit Nkanga in his address, reiterated his earlier position that the re-election of President Goodluck Jonathan and the election of Deacon Emmanuel as the next governor of Akwa Ibom is a task that must be done. Otuekong Nkanga argued that, Deacon Emmanuel remains the best candidate and wooed the people to vote massively for him to ensure that equity and justice is achieved through power shift to Eket Senatorial District.

The people of Ini were assured of a restoration of electricity in their area within his first three months in office by Deacon Emmanuel, who regretted that, the area has since been cut off from their source of power which proceeded from Arochukwu in Abia state. Describing Ini as the rice belt of Nigeria, Deacon Udom Emmanuel pledged to establish a rice mill to process and produce improved seedlings in Ini, and also resuscitate the Ini General hospital to optimum standard and services. The PDP standard bearer assured that every road project initiated by his predecessor will be completed by his administration and thanked the people for their support.
In his speech at the rally, Governor Akpabio, however directed that immediate steps be taken to reconnect Ini to the national grid to restore electricity to the area. He sued for the support of the people for Udom and assured them he(Udom) will carry on from where he stopped.
The rally which witnessed a mammoth crow was attended by the who-is-who in the politics of Ikono including the Political Leader, Chief Otu Robert, Obong Bassey Inuayen and Rt. Hon Ukata Akpan, Dr Uno Uno among others. These outstanding Ini leaders in their separate speeches all endorsed the PDP candidate and promised to mobilize their people to ensure the total victory of PDP and rout of opposition parties in the February 2015 elections.
Posted by MAN ABOUT TOWN at 4:47 AM