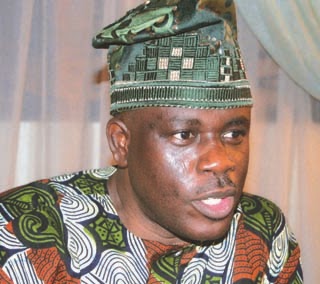 The Senate has suspended the ministerial hearing that is supposed to prelude the confirmation of the re appointment of Mr Musiliu Obanikoro as a minister.

The Senate did not give any reason the hearing was suspended or whether it was connected with the several petitions against his nomination.
Obanikoro and his family were sighted at the Senate gallery today, but left after it appeared the hearing has been suspended, tweeted Senator Babafemi Ojudu today.

The embattled former minister of state for defence, had resigned his appointment last year October to contest the governorship seat in Lagos, on the platform of the Peoples Democratic Party.

He lost to Jimi Agbaje and after initially decrying his loss as a fraud and instituting a legal challenge, he dramatically withdrew his suit in a Federal High Court, in Abuja.

He was subsequently nominated as a minister, by President Goodluck Jonathan.

But the nomination is facing a barrage of criticisms aa Obanikoro is mired in the scandal of working in cahoot with the military to rig the 21 June election in Ekiti state, last year, in favour of Governor Ayodele Fayose.

An audio, documenting the rigging plan, with Brigadier Aliyu Momoh of the Nigerian army has gone viral, further fuelling public resentment against deploying the military for poll duties.

President Goodluck Jonathan has had to reverse his position on the scandal.

Jonathan did not acknowledge that Koli ran away after he sensed danger to his life, by superiors who ordered his arrest. His 15 year old brother was arrested and tortured, after he escaped.

The Nobel Laureate, Professor Wole Soyinka has joined the chorus of demands for a probe into the scandal.

In a statement on Tuesday, Mr. Soyinka asked the Independent National Electoral Commission to work with the international community to conduct the investigation and make the findings of the exercise known to save Nigeria’s democracy.

He said brushing the issue aside as just electoral malpractice approaches criminal subversion and treason.

Mr. Fayose defeated the All Progressives Congress candidate and then governor, Kayode Fayemi, in the election.