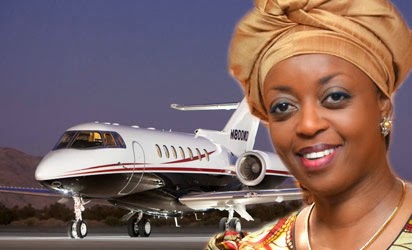 Minister of Petroleum, Diezani Alison – Madueke has finally opened up allegations she spent N10b to hire jets for her private use.

Petroleum Resources, Mrs. Diezani Alison-Madueke, yesterday, described as mere fabrication, allegations by her traducers that she spent N10 billion in leasing jets for her use.

The minister, who spoke in an interaction with some senior journalists in Abuja, said she was being framed by her accusers for merely rising up to change the Nigerian oil industry for the benefit of the country.

According to her, the lease of jets to run the highly technical and competitive oil industry is a common practice around the globe, since it is more cost- effective than buying.

The minister said it would have been unwise for anyone to spend N10 billion in leasing jets, an amount which can conveniently buy three new jets depending on the type.

She, however, admitted that although the Nigerian National Petroleum Corporation, NNPC, had a jet that was meant for her use, she was advised by aviation experts to sell it off since it was bought and parked abroad for some years, thereby raising safety concerns.

The minister said the hiring of jets for official function was a normal practice which had been in existence since the inception of NNPC and that it was meant to enable the corporation carry out its oversight functions over players in the sector.

[b]She said: “When I started work as minister, there was an oil aircraft but I was advised not to use it because of safety issues and we had to lease some planes for use. I was advised that it was more cost effective to lease planes for our operations.

“Based on what we were advised, and having added the figures, we felt satisfied it was better to be leasing plane for use. For the N10 billion, one can buy three planes. I don’t know how they came about that huge figure ascribed to me. It is unfortunate for some people to just sit down and accuse people without any fact or figure.[/quote]

Describing the allegation of spending the huge amount on private jets as disappointing, Madueke said the NNPC, under her, had been most transparent since its inception, as she had tried to improve the system of corporate governance in accordance with global best practice.

The minister, however, decried the tendency by some Nigerians to bring her down, pointing out that she would not be distracted by such antics since she had a job to do for the country.

On the non-passage of the Petroleum Industry Bill, PIB, the minister blamed it on several factors, among them, key players in the oil industry and vested political interests in the country
Posted by MAN ABOUT TOWN at 1:49 PM