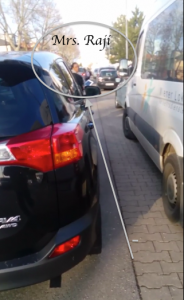 A Nigerian diplomat, Abimbola Raji was the centre of attraction in an unbecoming street drama in Austria recently.

A leopard they say will never change its colour. Mrs Abimbola S. Raji, a counselor with the Nigerian Embassy in Vienna, Austria who has been associated with many violent allegations has done it again.

This time not near the embassy but far away in 22nd district of Vienna and her victim we have decided not to make public for some certain reasons.
Photo: Mrs Abimbola S. Raji

Global Reporters (GR) gathered that on 12.02.15 at around 3:30pm when Mrs. Raji saw her victim parking his car, she drove quickly near him, parked her car almost at the middle of the road and started to provoke him with the accusation that he had “come to kidnap her children”.
When she was not successful in provoking him to act violently she unbelievably started to ask people around the streets to bear her false witness that her car had been hit by the victim’s car.

In a short video made available to GR (which we will also not make public for some reasons) her car is seen parked almost at the middle of the road and she is seen walking around in a way that confirms what an eyewitness told GR.
...elombah
Posted by MAN ABOUT TOWN at 11:39 AM