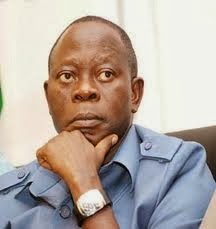 There is a growing division in political party, All Progressives Congress.

Insiders attribute this development to demand that Governor of Edo state, Adams Oshiomole be made a Vice Presidential candidate by a 'caucus' within the party.

'Division appears to have cropped up among leaders of the All Progressives Congress (APC) over the possible choice of Edo State governor, Adams Oshiomhole, as the party’s vice presidential candidate.

While most of the governors are said to be disposed to Oshiomhole, some of the leaders, particularly the former Lagos State governor and National Leader of the party, Bola Tinubu, are not comfortable with it and have moved to make it difficult for him to emerge.

Sunday Independent gathered that the governors are insisting that one of them must be picked as running mate to whoever emerged as the party’s presidential candidate later this year.

Sources within the party hierarchy said Governor Babatunde Fashola of Lagos State and his Ogun State counterpart, Ibikunle Amosun, are the arrowheads of this move.

“Given the fact that the party is coming to the realisation that a Muslim/Muslim ticket may not sell in next year’s presidential election, it may even make us vulnerable, the party leadership have decided to look for a popular governor, who is also a Christian, to run with our presidential candidate, who is more likely to be from the North”, said the source.

'The source, who craved anonymity because the party has not come out with a position on the matter, said the statement made two weeks ago in Benin by Fashola was in line with this script.
The Lagos State governor had expressed his readiness to support Oshiomhole for the presidency, saying that based on his achievements, he has all takes to lead the country.

Fashola is said to be working underground to convince other governors to queue behind Oshiomhole’s candidature of.

One of their jokers is that since they were a major plank during the planning and execution of the merger, the governors should be allowed to present a common candidate as running mate.

Besides, there are other factors, according to sources, that favour Oshiomhole, part of which is that he is from the same region as President Goodluck Jonathan, and he is likely to prevent the president from getting a block vote in the zone.

Oshiomhole’s closeness to the labour movement would also be an advantage the party would want to exploit at the polls.

“You should also not forget that Oshiomhole has long ties with the northern establishment during his Nigeria Labour Congress (NLC) days and they are always comfortable with him.

“So, the North would easily identify with the comrade when the chips are down”, the source said.
Strong opposition against Oshiomhole is however said to be coming from Tinubu, who sources said, may be backing the former Ekiti State governor, Niyi Adebayo.

Tinubu is said to be uncomfortable with the closeness of Oshiomhole to some retired Generals from the North.

'Apart from this, Asiwaju was said to have confided in some of the members that “Oshiomhole would be difficult to control when he gets to power”.

Before now, there has been speculation that APC is considering Oshiomhole and Rivers State governor, Rotimi Amaechi, as running mate to its presidential candidate.

It has also been revealed that pressures are still being mounted on some of the leaders, notably General Muhammadu Buhari and Tinubu to keep their words of shelving their political ambition for the overall interests of the party. The understanding among the members, Sunday Independent gathered, has been that for the party to stand a chance to defeat the ruling People’s Democratic Party (PDP) next year, the leaders would have to work for the party and not for themselves.

The same sentiment was expressed on Thursday by former Vice President, Atiku Abubakar, that it has become clear to most of the APC leaders that personal ambition would always make the opposition to continue to lose to PDP.

Atiku said from his discussions with the leaders, they are ready to make necessary sacrifice for the party.' 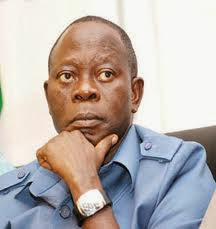