The uproar over the N10m  watch that adorned the wrist of  Aisha wife of new president that vowed that fight corruption in the country is yet to abate. 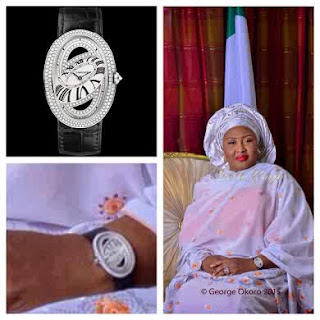 The Nigerian media was in an uproar this week over a watch first lady Aisha Buhari wore during her husband's inauguration ceremonies. She also wore the accessory described as a Cartier Baignoire Folle 18-Carat White Gold Diamond Ladies Watch in her newly unveiled official portrait. Nigeria media have estimated the watch costs roughly $52,000, or more than what President Muhammadu Buhari earns in three months from his official salary.

The timepiece triggered outrage from some Nigerians as the newly elected president has vowed to crackdown on government corruption, including overpaid public officials. Buhari played up his modest background while on the campaign trail, claiming he was a pastoral farmer with 150 cows who could barely afford to pay for his presidential nomination form. More than 50 percent of Nigerians live below the international poverty line of US$1.25 per day, according to the United Nations.

Some have claimed that the watch is merely a knockoff and doesn't cost more than $129. But critics said the watch is the real deal and is made of white gold and brilliant-cut diamonds. The official portrait of Aisha Buhari was released hours after the inauguration last week attended by U.S. Secretary of State John Kerry, among other world leaders
Posted by MAN ABOUT TOWN at 12:14 PM