Inside Story Of Why President Buhari Locked V.P Yemi Osinbajo Out Of Meeting With National Security Chiefs. 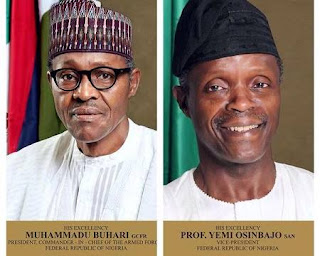 President Muhammadu Buhari alleged exclusion of Vice President Yemi Osinbajo from attending a national security meeting this week was no longer new, nor is it any longer news.

Osinbajo was reportedly refused "security clearance" and “locked out” of Buhari’s first briefing with the national security adviser on the president’s orders.

Buhari allegedly excluded his vice president from the closed-door briefing due to security concerns over Osinbajo attending the “very sensitive meeting.”

Buhari apparently felt it was too early in the day to bring Osinbajo, the former Lagos state attorney general and senior pastor, into his first briefing with the security chief.

The exclusive meeting on Monday with National Security Adviser Sambo Dasuki and other security officials lasted for hours and was part of the “debriefing process”.

Buhari allegedly excluded his vice president from the closed-door
briefing due to security concerns over Osinbajo
attending the “very sensitive meeting.”


Buhari was informed on the security situation in Nigeria, where the Islamist militant group Boko Haram has killed and displaced thousands of people in the last six years.

“They need to brief the president on the security situation in their various areas. They need to update him officially on the situation on ground,” a presidential aide said.

The meeting comes after the president announced the relocation of the anti-insurgency command center from the capital city Abuja to Maiduguri, the Borno state capital that has suffered a series of deadly attacks in recent days including suicide bombings and a grenade bombardment.

More than 50 people have been killed in Maiduguri since Buhari was inaugurated on May 29. The president said the command center would remain in the Borno state capital until the insurgents were restrained.

“The command center will be relocated to Maiduguri and remain until Boko Haram is completely subdued.

“But we cannot claim to have defeated Boko Haram without rescuing the Chibok girls and all other innocent persons held hostage by insurgents,” Buhari said during his inauguration speech on May 29.
Prior to his inauguration, Buhari expressed dismay that former President Goodluck Jonathan’s administration had withheld information and refused to brief the incoming government.

The party-elect All Progressives Congress slammed the outgoing People's Democratic Party for hindering a smooth transition one week before the presidential inauguration.