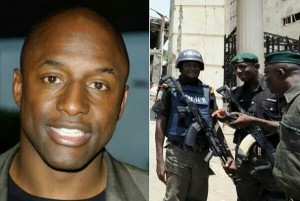 
The footballer is preparing to fight a bitter divorce case against his estranged wife Abigail in Nigeria, and claims she called the police.

John Fashanu has been questioned by police after they found an unlicensed weapon in his house during a police raid.

They seized the gun, believed to be capable of firing up to 30 rounds, as well as “five passports” before taking him to the city’s central station to be questioned.

It is understood the former Wimbledon and England striker made a statement before being released from custody after nearly six hours.

He is now due to return there by Monday.

Speaking exclusively to the Daily Mirror, Fashanu, 52, said: “I was not arrested – I went to the police station voluntarily. 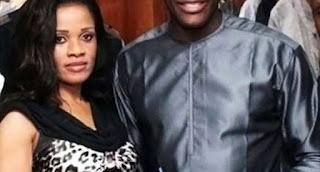 “I’ll go back tomorrow morning to the police station. I expect to pay a fine.

“It was an old fashioned firearm. I don’t actually know what model it is – it’s like a stub gun.”

Fashanu, who is preparing to fight a bitter divorce case against his estranged wife Abigail at Nigeria’s High Court, claimed she called in cops in revenge for him ending their marriage.

He added: “She is trying to do anything to get back at me. They raided my house after she filed a petition with the police. She needs to move on.

“The gun should have been licensed. I made a mistake and I hold my hands up to that.

“I have the five passports because they belong to young footballers from my academy. It’s no problem.”

It is understood police raided Fashanu’s home after his estranged wife Abigail filed a statement accusing him of having an illegal firearm and a number of young footballers from his academy also filed complaints accusing him of stealing their money.
Posted by MAN ABOUT TOWN at 11:03 AM