Emmanuel Uduaghan Refused To Give Speech At Successor’s Swearing In To Avoid Planned Public Humiliation Of Boos, Jeers & Pelting Of Stones By Angry Youths


Immediate past governor of Delta state, Emmanuel Uduaghan refused to give a speech at the swearing in ceremony of his successor, Ifeany Okowa. 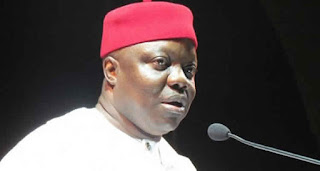 The intent was to avoid planned boos, jeers and pelting of stones on him by
those angry with his performance in office.

To avoid being booed and pelted by aggrieved Deltans at his swearing in ceremony on Friday, Mr. Emmanuel Uduaghan decided not to deliver a formal speech.

Shortly after the National anthem and opening prayers, the Master of Ceremony and ex-Commissioner for Special Duties, Mr. Powell Tos Ojogho, called upon Mr. Uduaghan to give a public address.

But Uduaghan, having got wind of the plans of aggrieved youths and other Deltans to boo and pelt him with rocks, quickly instructed Mr. Ojogho that he will not deliver any speech; then ordered that his official podium with the Delta State Government Seal be removed before proceeding to the oath ceremony.

One of the security men attached Uduaghan, confided in SaharaReporters that the ex-governor had learned of a planned public humiliation during the swearing in ceremony and decided that he will not deliver any speech, even if called upon.

"I can tell you that the former governor, Dr. Emmanuel Uduaghan, was already aware of the plan to boo and pelt him during the delivery of his last speech. He decided to put it aside and told the MC to skip his address and move straight to the swearing in. Oga, is aware that Deltans are seriously annoyed with him for one reason or the other which I can't tell you now.

"Let the truth be told my brother the people are actually not happy with Uduaghan, including the people who worked with him,” he said.

Meanwhile the newly sworn in governor of Delta State, Mr. Ifeanyi Okowa, may do away with several policies and programs Mr. Uduaghan implemented.