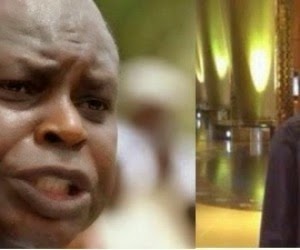 And the cause of their latest engagement is who gets the All Progressives Congress gubernatorial ticket for the 2016 Bayelsa state governorship election.

EX-Bayelsa State Governor, Diepreye Alamieyeseigha is seeking a return to the Government House on the platform of the All Progressives Congress (APC), it was learnt yesterday.
The former Governor was impeached on December 9, 2005, two years into his second term in office, over allegations of acts of malfeasance.

It was also gathered that an ex-Managing Director of the Niger Delta Development Commission (NDDC), Chief Timi Alaibe, is interested in the APC ticket ahead of the 2016 governorship election.
But a former Secretary of the Ijaw Youth Council and one time student union leader, Comrade Captain Ozu, has flayed the rumoured ambition of Alamieyeseigha’s quest to return to government house, saying it bothers strictly on greed.

He said, “Most of these so-called leaders are broke and have become liabilities both to themselves and members of their family. If you check very well, the only reason why these men want to get power is to enable them enhance their economic well-being. The aim is not to serve the people but to serve their pocket. Bayelsans are not fools. We know their antecedents and when the time comes, we will disgrace them at the polls”

It was learnt that Preye Aganaba (aka Prince of Odi), who lost his senatorial bid, is being prepared by Rivers State Governor Rotimi Amaechi to go for the party’s ticket.


A source, who spoke in confidence, said Alamieyeseigha, the state’s first elected governor, was nurturing his ambition to return to the Creek Haven, the sobriquet for the Government House in Yenagoa, on the platform of APC.


The source said the former governor and Igali are plotting to wrest power from the Governor Seriake Dickson.


It was learnt that the duo had been meeting in the last two weeks in Abuja to finetune their plots.
The source added that both men met last Friday at the late Oronto Douglas’ home, after a condolence visit, to discuss their plan.


Alamieyeseigha became governor in 1999 and was re-elected for a second term in 2003.
But he was embroiled in allegations of corruption and money laundering.
He was impeached by the House of Assembly, prosecuted and convicted by the Economic and Financial Crimes Commission (EFCC).


Alamieyeseigha was succeeded by his deputy, incumbent President Goodluck Jonathan, in 2005.
The ex-governor got the President’s State pardon on March 12, 2013.


The source said: “Alamieyeseigha is eyeing the governorship seat. His plan is to make a return to the seat of power in 2016. He has been holding a series of meetings with some APC stalwarts.


“He is assuring the APC leadership that with him at the helm, the militants would feel comfortable. He is saying Governor Dickson is not liked by former militants, citing the clash between the governor and ex-agitators over pipeline contracts.”


But when reminded that President-elect Muhammadu Buhari has a zero tolerance for corruption and may not allow the like of Alameiyesegha to become candidates of the party, the source said the former governor is banking on his closeness to some APC leaders.
The source said: “He is banking on his relationship with some national leaders of the APC to market him to Buhari because he knows that ordinarily, the President-elect would not give him a chance, regardless of the Presidential pardon granted him.
“But we know that Dickson still stands a good chance of retaining his seat in 2016, given his performance and strong progressive contacts within the APC as a former member and leader in the Alliance for Democracy (AD).”
But another source in the APC said the state leadership of the party had placed an embargo on the influx of defectors pending the swearing in of the President-elect.
Without the embargo, he said a gale of defections to the APC would have hit the PDP in the state.
“Major PDP stakeholders are warming up to join the APC in the state. We are going to be busy welcoming them. Most of them will be coming with governorship ambitions,” the source added