Aisha, wife of president elect Muhammadu was the subject of a great public uproar recently. 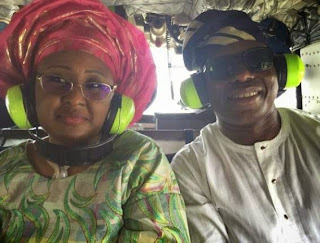 The closeness of the duo in the picture released by Tinubu and attempt at sycophancy in the attendant message had put President elect, his party and followers in reversed publicity.

And for her action, Aisha is said to have received very strong caution in different quarters.

The greyhound stands by its master, the hunter, through thick and thin, and the Cheshire cat snuggles and purrs by its mistress, through the darkest spells. Mere animals earnestly show such incontrovertible loyalty and love to their owners. It is only man that is innately capable of such grisly display of contempt and infidelity to his fellow man. This brings to mind, the scandalous desertion of President Goodluck Jonathan, by  men and women who were until recently, his closest friends, political associates, court jesters and confidants.

This vulgar display of insensitivity and outright treachery to Jonathan was perpetrated at its lowest depths at the recent thanksgiving service in Abuja. It rankles the veins of morality and fairness for these characters who were until recently, President Jonathan's closest associates and loyalists, to desert him just after he lost his reelection bid and the presidential seat to Gen. Muhammadu Buhari (rtd.), at the recently concluded general elections. No doubt, men shut their doors against a setting sun.

However, “Who should remain alive and praised; who should stay dead without renown depends upon criteria that powerful sycophants lay down,” stated Boris Pasternak, Russian poet and novelist during one of his fabled meditative spells. Pasternak’s summation could never have been more apt; among other truths, it emphasizes the desperation and astounding vanity of the friends of the President.

Also, to those who think the Friends of the First Lady of Nigeria (FFLN) are the only ludicrous and somewhat puerile gang of high society urchins in Nigeria; here is a newsbreak: there are more social urchins amongst us than we could ever think of. As you read, the desperation of Nigeria’s high society and aristocracy has attained such a shameful proportion that many people now go associating with the wife of the President elect. The desperation and astounding vanity of these gangs of urchins are only matched by rival gangs. Comprising a group of self-acclaimed society bigwigs, these gangs of upper class urchins currently parade themselves as the closest associates and inner circle of every eminent public office holder in Nigeria. Their objective like the FFLNs’ is to reap bountifully where they have not sown. They simply seek to clean out Nigeria’s treasury through their endless catalogue of fictitious contracts high profile state events among other scams. It is the duty of every incumbent public office holder as well as every patriotic Nigerian to work at nipping this shameful trend in the bud.

It is interesting to know that this same group of women formed an impenetrable ring around Dame Patience Jonathan. Today, these fortune hunters have shifted their allegiance from Dame Patience Jonathan and transferred it to Aisha Buhari. However, in spite of the incoming first lady’s predisposition to such displays of obsequiousness, OANDO MD, Wale Tinubu posted a picture of him and Aisha Buhari in a private chopper on his tweeter handle.  Buhari, we hear, has given his wife, Aisha an ear-pulling warning to be careful of politicians, businessmen and women. They have just started…