Reprieve appears not yet to have come the way of alleged drug baron Kashamu Buruji. 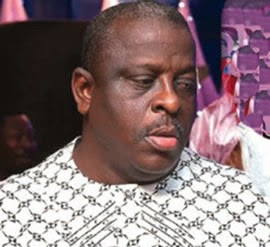 Arresting agency ordered out of his residence as called the move ‘diversionary and inconsequential’ as agents continue to maintain heavy presence.

The National Drug Law Enforcement Agency has kicked against a court order mandating it to withdraw its officials from the house of the Senator-elect for Ogun East Senatorial District, Mr. Buruji Kashamu, insisting that it is acting within the confine of the law.

Justice Ibrahim Buba of Federal High Court in Lagos, had on Tuesday ordered tens of officials of the agency to vacate Kashamu’s Lagos Mansion on Oladipo Omotosho Street, Lekki without delay.

The court had described the siege, which started on Saturday, as sub judice on the grounds that the agency did not follow due process.

In a statement on Tuesday by its spokesperson, Mitchell Ofoyeju, the NDLEA described the court order as trivial and an attempt to prevent it from performing its statutory functions. The agency maintained it had received an order from the United States Government to extradite Kashamu for drug related offences and claimed to have served a warrant of arrest on him.

The statement read, “NDLEA has described as diversionary and inconsequential reports of a court order directing its men to vacate the residence of Senator-elect, Buruji Kashamu, and requesting both the Attorney General of the Federation, Mr. Bello Adoke and Chairman/Chief Executive Officer of the NDLEA, Ahmadu Giade to appear in court.

“The NDLEA does not believe that any court will issue an order preventing a government agency from performing its statutory responsibilities in a lawful manner. The Agency has therefore refused to be distracted and will continue to maintain presence at the residence. It is advisable that Kashamu respects the law by submitting himself to the due process of the law.

“We are prepared to explore all legal means in handling this case to a logical conclusion. The Nigerian Government has received a formal request from the United States government for the extradition of Prince Buriji Kashamu. It also has a provisional warrant of arrest on him contrary to claims by his attorneys.”

The statement stated further that Kashamu had been a target of both the US Drug Enforcement Administration and Immigration and Customs Enforcement of the Department of Homeland Security for over 20 years and was further indicted by the Grand Jury in the Northern District of Illinois, United States on heroin trafficking charges.
Posted by MAN ABOUT TOWN at 11:43 PM