Hundreds Of Scammed Sure- P Staffers In Street Protests 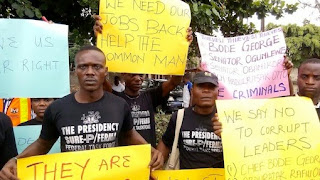 Employees of federal government empowerment programme, Sure- P/ Ferma engaged in street protests over non payment of their salaries for the past three years.

The recruited workers of the programme widely listed as one of the major achievements of outoing President Goodluck Jonathan regaled the world of stories of extortion and related abuse of office they suffered in the hands of executives of the programme they ended up not making a
dime out of.


The officers during a protest on Monday at the office of the National Human Rights Commission, Oshodi, Lagos, southwest Nigeria, equally protested against the fraudulent extortion of money from them by some executives of the programme.

The protesters accused their National officers and chieftains of the Peoples Democratic Party, PDP, in Lagos as being responsible for subjecting them to such dehumanising condition and extorting money from them, adding that the management was using the SURE-P/FERMA job to exploit desperate job seekers for their selfish political gains.


The protesters carrying placards with offensive inscriptions on it, sang and chanted solidarity songs alleging that they were mandated to pay outrageous sums before they were employed for the job, adding that three years after employment and resumption of duties they are yet to be paid a dime.

They said that at the commencement of the programme in 2013, applicants were made to pay the sum of N32,500 each for uniform while additional N5,000 was paid for the procurement of the SURE-P forms.

They alleged further that the forms were picked at the residence of PDP Chieftain, Chief Bode George, with a promise that they would be trained in recognised institutions in the country.

They lamented that to date, no form of training had been organised for them. Instead, they were used for political rallies whenever any prominent government official was in the state in the build up to the last general elections.

The angry protesters said the whole recruitment exercise was a fraud, adding that they were just exploited by some people in the name of Federal Government project.

They vowed to continue their protest till the Presidency pays them the arrears of their salaries for three years.

Some of the women among the protesters who spoke with our correspondent in tears also recounted their tales of woe in the hands of the coordinators of the programme.

The pains they went through knows no bound in the course of their respective trainings as they took turns to tell their stories.

Some alleged that they lost their pregnancies while undergoing rigorous training exercises in the course of the programme while some said they lost their loved ones including husbands and children. “I lost my sick husband while doing this stupid work because I hardly had the time to take proper care of him. I expended all I had on the work because of the prospect I thought was in it being a federal government thing but at the end of the day, it was tales of regrets everywhere,” said Nkechi.

According to the coordinator of the protest, Aderibigbe Kayode Vincent,”we heard from a source within the Presidency that A PDP chieftain in Lagos (names withheld) told Mr President he paid us N350,000 each. This is a big lie. We have not been paid a dime for the three years that we have worked. We have over 70,000 staffs and they are owing all of us. So, I don’t know where he got that figure from.

“We ought to have had this protest on the eve of the governorship election but because they knew it will negatively affect the chances of the PDP at the polls, they called us and begged that we should shelve it. We went to their office on the Friday before the election as earlier scheduled and we waited till 7pm and they refused to show up and address us.

“We already wrote all the appropriate authorities on this ugly development including the police, ICPC, EFCC, our lawyer and others and they advised that we embark on the protest if not our money will not be paid.”
Posted by MAN ABOUT TOWN at 7:53 AM