PPMC Boss, Haruna Momoh is all out to save himself from repercussions of past deeds. 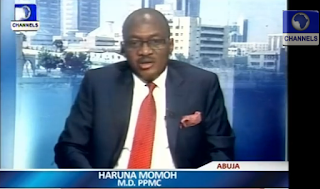 And his first major step is to desert generous boss he reportedly perfected a litany of lucrative deals that bewildered many, Petroleum minister Allison Madueke.

Men shut their doors against a setting sun; cowards swap horses in midstream and desperate underlings desert their principals at the onset of the latter's destruction and hard luck. It is the way of the world for the closest friends and allies to conveniently disappear just when they ought to lend a helping hand.It takes a man of unusual loyalty, courage and blind faith to stand by a friend in his time of need hence the timeless saw that counsels that the greatest good a man could do to himself is to surround himself with friends and associates whose hearts pulsate to the beat of mortal fidelity and compassion.

As the storm gathers to devastate the Elysium Nigeria's petroleum minister, Diezani Alison-Madueke, built for herself, her closest friends, business associates and even stooges are deserting her, chanting: 'Every man for himself." In the cowardly scramble that ensues, it is impossible to ascertain that associate, friend or stooge that would confidently stand by her side come what may, for the sake of the good times and the outrageous loot they acquired by her.  Rumour however, has it that Haruna Momoh, Managing Director (MD) of the Petroleum Products Marketing Company (PPMC) has joined the bandwagon of Diezani's fair-weather friends; Haruna, according to the rumour mill, has also deserted the petroleum minister, who until recently, was his generous boss and benefactress.

The mass desertion of the petroleum minister by her friends and underlings comes in the wake of her principal, President Goodluck Jonathan's defeat at the March 28 presidential polls by the All Progressives Congress (APC)'s Gen. Muhammadu Buhari. In the wake of President Jonathan's defeat, speculations and unfolding realities indicate that the incoming government may likely probe and prosecute Diezani over the several deals she perpetrated since she assumed office as the country's Minister of Petroleum; thus the frantic quest by many of her former friends and underlings to dissociate themselves from her and keep decent miles away from even her shadow.

According to an insider, Haruna shamelessly joined this band of deserters and backstabbed his benefactress to pitch tent with the incoming political power. The source claimed that Haruna is no stranger to betrayal, stressing that he has only done to Diezani, what he did to Austen Oniwon, the former NNPC head honcho.

The rumoured desertion of Diezani by Haruna however, pales in the face of reality. Until the rumours started making rounds, Haruna's relationship with the petroleum minister seemed intact. Despite the difference in age, tribe and religion, Diezani saw in Haruna a dependable ally and beyond counting dollars in multiple billions, the duo have successfully pulled off many lucrative deals that have left friends and business associates gaping in envy and bewilderment. Haruna, despite his elevated position in the PPMC, played stooge and errand boy to Diezani, running errands for her and carrying her bags after her on her frequent trips abroad.

In response, a very close friend of the duo has however, denounced  rumours of Diezani and Haruna's separation claiming it is the handiwork of mischief makers desperate to sever the very close ties and bond of friendship between the two. But this curt denouncement will just not be enough to dispel the rumour. Haruna will have to come out to either deny or affirm the claims in the rumour. Until then, his silence will be taken as affirmation of his cowardly desertion of his benefactress, Diezani, in her time of need