‘’I Hope I Will Buy The Team, Not At A Ridiculous Price But A Price The Owners Won’t Resist’- Aliko Dangote On Plot To Acquire Premiership Club, Arsenal 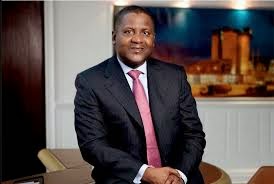 Africa’s richest man, Aliko Dangote, has revealed that he aims to replace Arsene Wenger with a combination of Patrick Vieira and Thierry Henry at Arsenal.

Dangote, who made no secret of his desire to make an offer for Arsenal, is confident that he will be able to make an offer that cannot be refused to major shareholders, which includes current owner, Stan Kroenke, and other multi-billionaire shareholder, Alisher Usmanov.

“Wenger needs to change his style a bit. They need new direction,” Dangote was quoted as saying by a publication.

He added: “I still hope I will buy the team. I might buy it, not at a ridiculous price but a price that the owners won’t want to resist. I know my strategy.”
In addition to those quotes, a close source hinted that the Nigerian billionaire aims to appoint Patrick Vieira as manager with Thierry Henry alongside him should he become successful in a takeover bid.

“The plan would be to get Patrick and Thierry on the coaching staff for a period before giving them the reins and with Arsene taking a place on the board and eventually becoming chairman,” the source suggested.

It may thus be difficult for the American to turn down such a major offer.
Posted by MAN ABOUT TOWN at 9:47 AM