Information has it, Dame Patience the wife of ougoing President Goodluck Jonathan doesn’t want to relocate back to Otuoke, Bayelsa state with him. 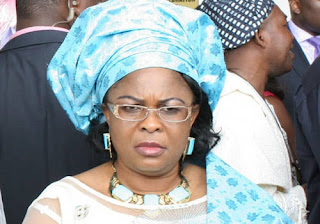 President Goodluck Jonathan, who will formally hand over to Mr. Buhari tomorrow, has made it known that he would like to return to Otuoke, his hometown in Bayelsa State, after the handover ceremony.

Already, dignitaries of the Peoples Democratic Party in Bayelsa State as well as friends of Mr. Jonathan have planned a reception for him in Yenagoa, the capital of Bayelsa State, “to give him a warm welcome back,” in the words of a party source.

One of the two sources, who is quite close to the Jonathans, told SaharaReporters that Mr. Jonathan’s post-presidential plans have triggered several arguments between the Bayelsa-born president and his wife, who is originally from Rivers State. “Patience and Dr. Goodluck Jonathan have been quarrelling over this issue, and Patience has now stubbornly refused to accompany President Jonathan back to Bayelsa,” the source said.

According to one of our sources, Mrs. Jonathan plans to stay put in Abuja as her primary base in order to focus on her real estate business. The outgoing First Lady acquired numerous choice properties and lands in Abuja during the years her husband served as vice president, acting president, and president.

saharareporters.com
Posted by MAN ABOUT TOWN at 11:41 PM