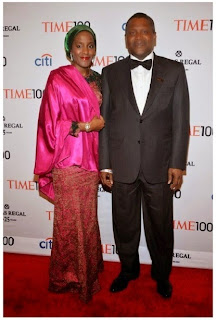 He is sad to be feeling mayhem between two Nigerian communities as part of efforts to increase his massive wealth.

With his fortune soaring from $2.1 billion to $13.8 billion in the short space of a year, Aliko Dangote, Chairman of Dangote Group bounded up the ladder of prestigious Forbes magazine’s billionaire’s list.One would think that he would at least exercise some restraint in his frantic lunge for greater wealth and acclaim but Dangote wouldn't.

His lust for affluence and favourable media mention is limitless; so insatiable it is, that it persistently drives him to commit shameful and grievous acts in the course of business; another disgraceful lunge by the chairman of Dangote Group resonates in his bid to destabilise Ebira and Okpella communities in Kogi and Edo States respectively.

Dangote Cement Plc with support from Ado Ibrahim, traditional ruler of Ebira, is arming jobless youth and vigilante groups to wreak pandemonium on neighbouring Okpella community in Edo State. This plot to destabilise the two communities is frantically supported by the traditional ruler of Ebira, Alhaji Ado Ibrahim. Ibrahim allegedly answers to Dangote and owes unflinching allegiance to him because the immense financial rewards he gets from doing so. Thus he works assiduously to actualize his benefactor's ambition of owning Okpella region's limestone deposits and perpetuating his business empire in the area.

The situation aggravated soon after Ado Ibrahim, through his company, AICO Ado Ibrahim and Company Ltd. illicitly sold limestone deposits in Obu, Okpella in Edo State to Dangote Cement Company Plc. A rival cement producer, BUA Group's Edo Cement Company made inroad into Okpella community and in the wake of its attempt to establish a cement factory in the area, Dangote has declared war on the company and its host community. It is instructive to note however, that Obu, Okpella falls within neighbouring Edo State and not Kogi State.

Ado Ibrahim's frenzied attempts to actualise Dangote's business interests in the area remains indefensible and untenable in the face of hard, uncontestable facts. Available facts show that Dangote Cement Company has no business prospecting limestone in Obu, Okpella, Edo State.
Intelligence reports commissioned and issued by British colonialists from 1929 to 1954 make it abundantly clear and beyond doubt that the River Obu marks the North Eastern boundary of Okpella which has an area of 144.5 square miles.

In 1954, the Nigerian government enacted the law which is still the extant law proclaiming the North Eastern boundary between the Western region and the Northern region, which till date consists of the boundary between Edo State and Kogi State as it was between Bendel State and Kwara State.
Furthermore, in 1994, when Alhaji Ado Ibrahim under the cloak of fathom and non-existent series of Mining leases, including Exclusive Prospecting Licensing numbers 11302, 11303, 11316 and SEPL 229, out of which he carved a yet Fathom ML 17524 sought to annex the same OBU mineral deposit in Okpella, Edo State, the Okpella communities being law abiding citizens filed suit no: FHC/B/42/94 at the Federal High Court, Benin. The suit was against Alhaji Ado Ibrahim and his company as well as the Federal Minister of Mines, the Attorney-General of the federation among others. The Okpella people sought inter alia, the invalidation of those prospecting rights and leases as well as perpetual injunction to restrain the defendants from entering Okpella territory, Obu, under the cloak of any such bogus mineral rights. Judgment was given accordingly in favour of Okpella people and Alhaji Ado Ibrahim and his company were restrained perpetually, yet and in violation of this judgment, he continues to attack Okpella and attempts to seize Obu deposits and excise it to Kogi State.

Having failed at his attempts to do so, Alhaji Ado Ibrahim and his company applied to Okpella for local consent in 1997 for the Obu mineral deposit but he was informed of the impossibility on legal grounds. This is because the Edo Cement Company had already been granted the license. Thereafter, he resorted to illegal means and methods to acquire the rights; his desperate measures led to his invitation of Dangote Cement plc into the fray by seeking to alter the legal boundary between Edo and Kogi State, and renaming the same deposits as "Ubo" or "Oguda-Ubo" deposit, a non-existent entity. Alhaji Ado Ibrahim with the aid of Dangote Cement Plc continue to wage war against Okpella community and Edo (Bua) Cement with a view to overrun the cement industry in Okpella, Edo State and unconstitutionally excise and cut the portion of Edo State and reallocate it to Kogi State.
Posted by MAN ABOUT TOWN at 11:24 PM