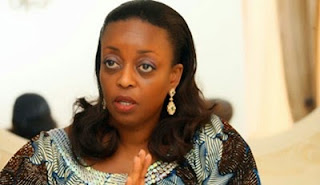 Outgoing petrol Minister, Diezani Alison- Madueke is currently in a hide and seek game according to fresh revelation.

The Minister of Petroleum Resources, Mrs. Diezani Alison-Madueke, who has been slammed with a N1billion libel suit by an Abuja-based media consultant, Mr. Simon Imobo-Tswam, is doing everything to evade being served with the writ of summons.

It would be recalled that on 27th April, 2015, my client, Simon Imobo-Tswam, dragged the minister before an FCT High Court for libel, mischief, and the unauthorized use of his name, his platform (Network of Progressive Activists) as well as his GSM Number to launder her image in the media via news-stories and advertorials.

The Suit, No. CV/1679/15, is before Court 26, which is presided over by Justice M.M. Kolo.
For more than two weeks now, every effort to serve the court papers on the minister as well as her agents, Mr. Michael Mukwuzi and Comrade Timothy Ademola, have proved abortive. While Alison-Madueke is the 1st Defendant; Mukwuzi, who is a staff of NNPC, is the 2nd Defendant while Ademola, the Executive Assistant to the Special Assistant to the President on Youth and Student Matters, is the 3rd Defendant.

My client is claiming N1billion, being “General and compensatory damages,” from the Eight Defendants jointly and severally for the mischievous and unauthorized use of his name, platform and GSM Number to attack ex-President Olusegun Obasanjo when he alerted the nation of massive corruption in the NNPC and to as well defend the Minister’s expenditure of over N10 Billion on her chartered jets.

Mrs. Diezani Alison-Madueke, the Honourable Minister, does not want to be served. And her agents are toeing the same line. The court bailiff, Mr. Dauda Akumka, has been to the NNPC Towers more than five times without being allowed to see the woman and serve her personally as the law requires.

The bailiff is either stopped at the gate by security personnel upon identifying himself; or when he is allowed in, and he gets to the Minister’s office, her security details tell him he can’t see her and order him out. Today, being the 25th May, 2015, the security personnel stopped him at the entrance, telling him the minister is away.

It is the same thing at the Media Unit of the NNPC Public Affairs Department where the 2nd Defendant, Mr. Michael Mukwuzi, is always said to be “out on special assignment.” Similarly, the 3rd Defendant, Comrade Timothy Ademola, has also being evading service.

We are surprised at this action of Mrs. Alison-Madueke. This is because she knows the value of a good name, and has sued the APC, Vanguard newspapers and its editor, Mideno Bayagbon; Leadership Newspapers and its editor, Ekele Peter Agbo; Premium Times and its editor-in-chief, Dapo Olorunyomi; Vintage Press Limited and its editor, Lekan Otufodunrin as well as the National Broadcasting Commission (NBC) and the Nigerian Press Council (NPC) before an Abuja Federal High Court, presided over by Justice A.F.A.  Ademola.

It is curious that while all the Defendants above did not evade service, Alison-Madueke and her agents are doing everything to thwart the course of justice. As part of the game, she has directed one of her lawyers to get in touch with the bailiffs and collect the court processes when she knows that service of originating process has to be served on her personally.