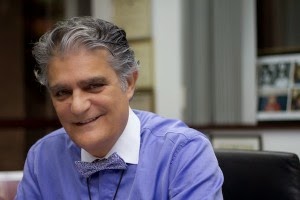 Aides of rich Lebanese, Amin Moussalli were arrested in the raid of expired products worth N1billon found at Chocolate Royale, the top end confectioner and restaurant the wealthy foreigner owns.

Lebanese businessman, Amin Moussalli, owns Chocolate Royale. The pricey confectioner and restaurant is a popular stop for well-heeled Nigerians as well as foreign nationals who work for oil or communications firms or as diplomats.

Citing concerns over the alleged use of expired and dangerous products, officials of the National Agency for Food and Drug Administration and Control (NAFDAC) have shut down Chocolate Royale, a high scale establishment in Lagos located at Plot 267A Etim Inyang Crescent on Victoria Island. The company sells confectionaries and food, catering to a clientele drawn from Nigeria’s elite and wealthy set as well as privileged expatriates.

In addition, the agency also sealed off the residence of the company’s managing director at 1 Karimu Kotun Street, also on Victoria Island, Lagos. Agents thoroughly searched the MD’s home and carted away frozen products deemed unsafe for consumption.

Lebanese businessman, Amin Moussalli, owns Chocolate Royale. The pricey confectioner and restaurant is a popular stop for well-heeled Nigerians as well as foreign nationals who work for oil or communications firms or as diplomats.

In a statement, NAFDAC’s spokesman, Anslem Okonkwor, said the agency sealed off Chocolate Royale “for various unethical practices and non-adherence to good manufacturing and hygienic practices.”

The agency said it acted on a tip-off that the company was engaged in illegal importation as well as the storage and use of expired ingredients and products to prepare food and confectionaries.

According to Mr. Okonkwor, the company was serving unhealthy food “to unsuspecting customers.” He added that Chocolate Royale was operating and maintaining illegal cold-rooms at their MD’s residence “where large quantities of various expired and spoilt food ingredients worth millions naira were uncovered.”

NAFDAC said it had received an “avalanche of complaints of violation and affront of the company to the regulatory body’s regulations.”

Mr. Okonkwor disclosed that some top officials of the company were arrested and would be interrogated for “willfully obstructing the NAFDAC operatives in [the] course of their duties.” He said other officials had gone into hiding.

The agency’s statement said its agents seized unsafe products worth more than N1 billion. The products were hauled away in six vans after an operation that lasted close to nine hours.

NAFDAC’s director of Investigation and Enforcement, Kingsley Ejiofor, said the seized products would “be sampled and taken to the laboratory for analysis, where the labels and contents will be properly analyzed. And at the end of the day when the results are out, that will determine the next of action.”

Mr. Ejiofor, who also serves as the chairman of a federal taskforce on fake and counterfeit drugs, unwholesome processed foods and other regulated products, praised NAFDAC agents for the successful operation at Chocolate Royale “despite the antics and intimidations from the staff of the offending company.” He added that the company would remain closed until the investigation is concluded.

NAFDAC’s Director-General, Paul Orhii, inspected the seized products at the agency’s warehouse in Apapa, Lagos. He said the products were not only expired, but that they should never have come into Nigeria since they were never registered by NAFDAC. Mr. Orhii ordered the investigators to demand the company’s goods clearing documents to ascertain whether the unsafe products were legally cleared at the points of entry.